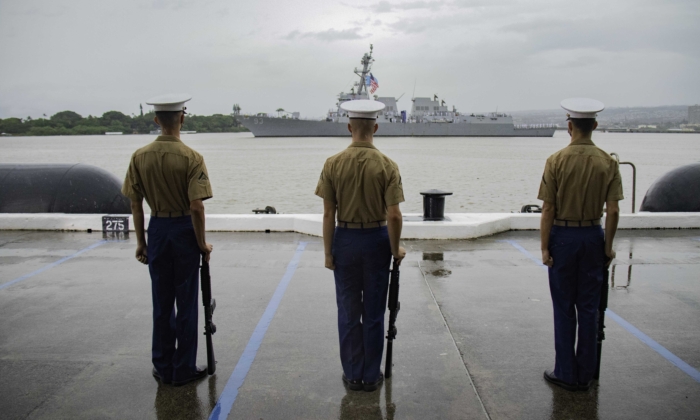 PEARL HARBOR, Hawaii—The National Pearl Harbor Remembrance Day Commemoration was a solemn day as survivors journeyed back to pay their respects for the fallen and to honor the living.

The quiet Sunday morning on Dec. 7, 1941, quickly became the epitome of death and destruction as Japanese forces descended on Pearl Harbor unannounced and unprovoked.

Guy Dill, age 99, enlisted in the U.S. Navy in January 1942, right after the bombing of Pearl Harbor.

“I tried to enlist earlier, but the line was out the door and around the block, so I went back a second time. I enlisted as quickly as I could, because I wanted to protect our country,” Dill told The Epoch Times.

He served in the Navy for 23 years, retiring as a lieutenant commander. He and his son, Butch, attended the 80th-anniversary ceremony on Dec. 7.

“Being here today allowed me to see what my dad has talked about all of my life. I have heard many stories about Pearl Harbor, and I now have a better understanding of what he experienced. It truly was an honor to be here today,” said Butch, who also served in the Navy, from 1989 to 1996 during the Persian Gulf War.

Guy and Butch were on one of the ships that were alongside the USS Missouri, the ship on which the Japanese signed the Instrument of Surrender, ending the war. During their times in service, Guy sailed in the South Pacific and Butch sailed in the Persian Gulf.

“Surreal being that close to history,” Butch said.

The Pacific Fleet Band began the ceremony’s prelude music with “My Faith Looks Up to Thee.”

U.S. Navy Veteran Howard Touchstone, 96, from Rome, Georgia, attended the service. He told The Epoch Times that he credits his mother’s prayers for bringing him and his twin brother home from the war.

“Momma spent a lot of time in church praying. I know that is what brought me and my brother home safely,” Touchstone said.

The ceremony was filled with symbolism. It began at 7:50 a.m., and a moment of silence was held at 7:55 a.m., representing the moment that the Japanese planes began their assault.

As the National Anthem was played, the survivors stood, many rising from wheelchairs with the assistance of family and friends. As they raised their weathered hands in salute, it was apparent that 80 years hadn’t quelled their passion for America.

As a tradition, each division of the military participates in the flowering of the wreath. This year, for the first time, the U.S. Space Force participated, having been created in December 2019 by President Donald Trump.

The days before and after the remembrance ceremony were filled with memorial services, reunions, and other activities to help engage veterans with each other.

The events also included trips to the USS Arizona Memorial, an interfaith church service, and a band practice session with the Pacific Fleet Band, featuring a guest appearance by Pearl Harbor survivor Ike Schab, 101. In 1941, he was a musician in the U.S. Navy, and he was assigned to the USS Dobbin, which was dry-docked at the time of the attack.

This year also included the interment of USS Arizona crew member and Norfolk Naval Shipyard Superintendent Harvey Milhorn, a gunner’s mate on the ship. He was one of the 335 survivors from the sinking of the USS Arizona. His family didn’t know of his wishes to be interred in the battleship until they found his written request when cleaning out his home after his death.

Milhorn is the 45th person to be interred on the USS Arizona.

The 80th anniversary marked the completion of the USS Oklahoma Identification Project, which identified a total of 396 of the 429 causalities aboard the USS Oklahoma. This was a cooperative effort between the Defense POW/MIA Accounting Agency (PDAA) and the Navy Casualty Office, with the mission being to identify and bring each member home with honor and dignity.

As the program concluded in 2021, there were 33 members who couldn’t be identified. They were reinterred in a private ceremony at the “Punchbowl”—The National Memorial Cemetery of the Pacific, which is sited at the Punchbowl Crater in Honolulu.

Though their remains weren’t identified, their names are known. Greg and Kalia Lucas traveled from Washington to participate in the burial of her distant cousin, Randall Walter Brewer.

“We know so little about him, but it is such an honor to be here,” Kalia told The Epoch Times. “As a service member, it gives me a high sense of hope that someday we will have answers.”