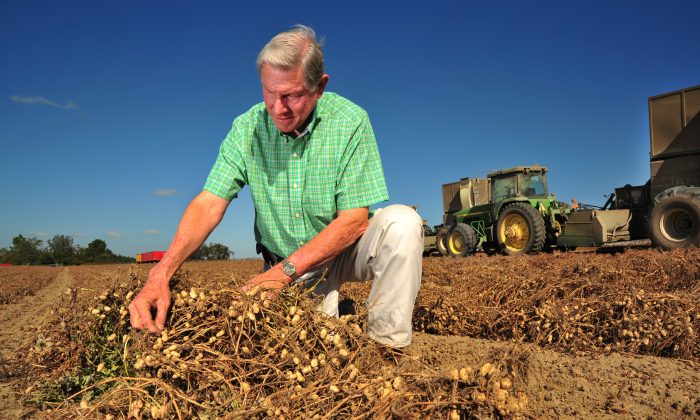 Peanut grower Armond Morris examines peanuts ready for harvest at his Irwinville, Ga., farm on Thursday, Oct. 25, 2012. Peanuts are one of the crops that won't be affected by the California drought, since none are grown in the state. (AP Photo/Todd Stone)
US

California is the biggest producer of crops in the United States, but a number of crops will not be affected by the worsening drought in the state.

About half of U.S. fruits, vegetables, and nuts come from The Golden State.

Almost every pomegranate, almond, olive, artichoke, kiwifruit, pistachio, walnut, and fig in American supermarkets come from California. But many other products do not.

Most grains, as well as a smattering of other commonly consumed fruits and vegetables, largely come from outside California and will not be impacted by the drought.

Peanuts, oats, corn, rice, and soybeans are produced mostly in the Midwest or South, according to the California Department of Food and Agriculture and the United States Department of Agriculture. Peanuts are primarily produced in Georgia but spread across nine other states as well; oats are grown in 31 states; corn yields come from all but two states, Hawaii and Alaska; and soybeans are grown in 31 states. Out of the four, only corn and oats are grown at all in California, and in relatively small portions.

Apples, blueberries, cherries, grapefruit, oranges, and watermelon top the list of fruit largely grown outside the state. And a number of the major non-food crops, such as cotton and tobacco, also mostly come from outside California. Apples are grown in 32 states; blueberries are grown in 38 states; cherries are primarily grown in Washington, California, Oregon, Utah, and Michigan; citrus is primarily grown in Florida; and Florida and Georgia are the leading producers of watermelon.

Even though California does grow some of these crops, the amounts are small enough to temper any potential increases in prices. For instance, California grows about 16 percent of watermelon. Some crops, such as squash, are partially imported, which will also help keep prices level in the coming months and years.

Food prices have risen slightly due to the drought and will potentially keep rising, but the good news is these common foods that are primarily grown outside of California should be buffered from any price increases.