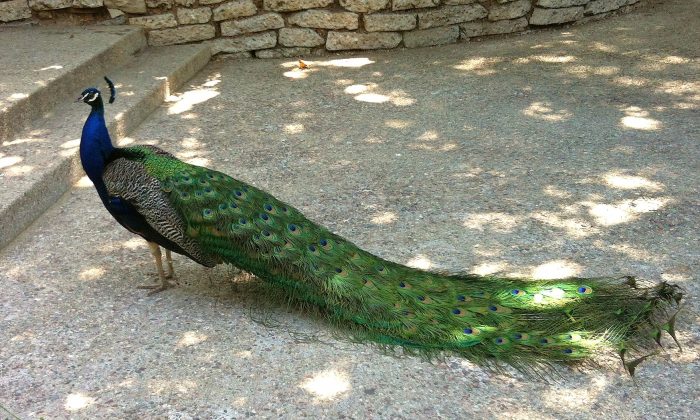 A peacock shows off its tail feathers in Arcadia, Calif., on June 21. (Sarah Le/Epoch Times)
US

The peacocks, which have been running wild in the neighborhood for almost 100 years, are a familiar sight along Dapplegray Lane and the surrounding area.

A survey taken by the DLPOA last year found that 53 percent of over 130 residents surveyed were in favor of keeping the peacocks, while 47 percent were not.

While aesthetically pleasing, some residents complain the peacocks are noisy, particularly in the evenings and during mating season. They also complain their droppings are a nuisance, and they have been known to scratch cars with their pecking.

“I understand that people are in favor or against, but to go out and kill a bird is just deplorable,” said Retz, who is concerned about the uptick in deaths.

Retz said some residents complain there are no natural predators of the birds, but the DLPOA found otherwise.

It claims hawks, crows, and coyotes eat the birds, and raccoons and possums regularly steal the peahens’ eggs.

A report from the 1960s found about 200 peafowl living in the city. In 2005, another report by the city of Rolling Hills Estates found 211 birds.

Retz said this shows the population of the birds has been fairly stable, and there are natural controls to keep the birds from overpopulating.

“When you consider that there are 50 birds that have been killed in the last couple of years, that’s a significant amount of the population,” said Retz.

Killing peafowl in the city is a felony for animal cruelty with a penalty of up to three years in prison or a $20,000 fine.

The Sheriff’s Department, animal control services, and the Society for the Prevention of Cruelty to Animals Los Angeles are all investigating the killings. So far, no one has been caught.

A peacock shows off its tail feathers in Arcadia, Calif., on June 21. (Sarah Le/Epoch Times)