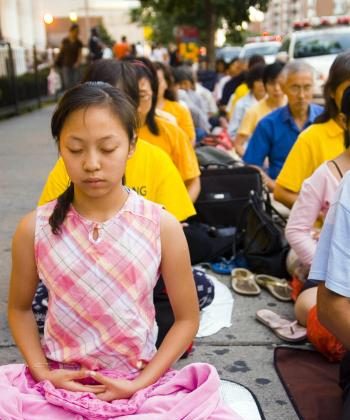 PEACEFUL PROTEST: Falun Gong practitioners gathered in Flushing for a peaceful protest of the recent attacks against them and their beliefs (JOSHUA PHILIPP/THE EPOCH TIMES)
US

FLUSHING, New York City—Meditating quietly along the sidewalks of Main Street in Flushing, Falun Gong practitioners came to protest recent attacks against their beliefs. A pleasant change for the busy streets of New York’s self-made, second Chinatown, tranquil music filled the air, and many passersby slowed to observe the peaceful demonstration that was held in the late afternoon of August 9.

With over 70 people sitting in meditation, the gathering was held in protest of two tables that were recently set up along Main Street that disseminate hate propaganda against Falun Gong, a Chinese meditation practice based on Truthfulness, Compassion, and Tolerance.


Chris Thomas, a Falun Gong practitioner and a native of Wellington, New Zealand said that he had come to Flushing to help people understand what Falun Gong is, amidst the propaganda against it. “I came down here to help the people of Flushing learn the truth about Falun Gong because a lot of people in this area are poisoned by the CCP to the point where they even assault people in this free country,” said Thomas.

“I feel sorry for them because they’re not really bad people. A lot of them aren’t bad people, they’ve just been deceived,” said Thomas. “A lot of times when you can’t get through to them you feel at a loss as to what to do.”

Thomas continued, mentioning that many of the people against Falun Gong are simply being misled. “They really believe they know what Falun Gong is but they don’t at all,” said Thomas. “It’s because 9 years of slander by the CCP has twisted people’s minds against Falun Gong.”

“I came here to send out good thoughts through meditation and to let people see what calm, good people we are,” said Thomas.

Established on August 2, the tables spread false information about Falun Gong based on propaganda that the Chinese Communist Party (CCP) has been spreading since it launched its persecution against the meditation practice on July 20, 1999.

Another man, Victor Yau (also known as Wei Qiu) had been arrested after allegedly attacking a Falun Gong practitioner with a metal steering wheel lock in Brooklyn on June 15. Yau had been distributing hate materials that can now be found on the tables in Flushing.

Despite the attacks, Falun Gong practitioners have continued to exercise their beliefs in the area. “They seem so peaceful and for them to be standing here, doing mediation for their rights and for what they believe in,” said Mina Ahd, a tourist from Kansas. “It just says so much about them. They don’t need war, they don’t need fights or the abuse or anything like that. They just want a peaceful life and I think that they have a right to have that.”

Ahd commented on the Falun Gong practitioners’ behavior amidst the attacks against them and their beliefs. “I’m very proud of them for standing up and I know that they’ve been attacked,” said Ahd. “Those who attacked have no right and it shows that they fear. Whoever is involved, the politicians and everything, it shows their fear and it shows how wrong they are.”