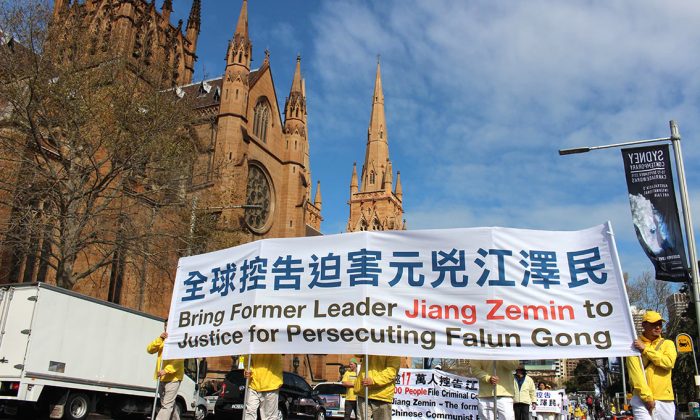 Falun Gong practitioners march in a parade in Sydney on Sept. 4, 2015, calling for an end to the persecution launched by the former Communist Party leader Jiang Zemin. (Epoch Times)
By Mimi Nguyen Ly

SYDNEY, Australia—Hailing from all over Australia, hundreds of practitioners of the traditional Chinese spiritual practice Falun Gong paraded peacefully through Hyde Park on Sept. 4 before gathering in The Domain, to show their support of lawsuit actions against China’s former leader Jiang Zemin.

General Secretary of the Chinese Communist Party (CCP) between 1989 to 2002, Jiang Zemin, is being sued for crimes against humanity, including genocide and torture.

Back in July 1999, Jiang single handedly ordered the nationwide persecution of Falun Gong in China, despite objections from other members of the CCP’s leadership. Mass detentions, brainwashing and forced labour followed, with torture routinely carried out in detention centres to force practitioners to give up their beliefs.

Dr. Lucy Zhao, president of the Falun Dafa Association of Australia Inc. said the list of practitioners in Australia filing complaints against Jiang is growing.

“In Australia we already have more than 100 people who filed criminal complaints against him [Jiang],” she said, outside the Federal Court building on Macquarie Street.

In early May this year, China’s Supreme People’s Court introduced provisions to protect citizens’ legal rights to submit written complaints that cannot be automatically rejected as they routinely were in the past.

An immense wave of complaints followed and since May 1, more than 160,000 people in mainland China and around the world have filed criminal grievances against Jiang for the persecution they suffered under his directives.

Sydney Falun Gong practitioner Jeff Xu, arrested in 2001 in Jinan City, Shandong Province, told of the harrowing mistreatment he received at a labour camp he was put in.

“I was handcuffed and tied down to a metal bench, stripped of my clothes and electrocuted with 3-4 electric batons all over my neck and chest. Everyone there was electrocuted, including elderly women over 80 years old,” he said.

“But I felt strong in my faith. I knew practicing Falun Gong is not wrong, it is Jiang and the CCP that are wrong,” Xu said.

“When will enough political leaders have the courage to stand up to the Chinese government and simply say ‘you must respect universal human rights?'” he said.

“There is no respect from any country to political leaders of another country that are too craven to stand up for their principles,” said Mr. Shoebridge.

The parade and rally formed part of a series of events to inform the public about the 16-year-long persecution in China, leading up to a national conference on Sept. 6 where people shared their experiences practicing Falun Gong.

Participants in the parade carried signs covering key themes in addition to the lawsuits. The issue of illegal organ harvesting of Falun Gong practitioners was highlighted as was quitting the CCP movement. Falun Gong’s gentle exercises and meditation were also on display in the parade.

Starting at Martin Place, the procession of practitioners and supporters walked down Macquarie St. and through Hyde Park, around College St. and into The Domain via Gallery Road.

For Susan, a bystander, it was the first time seeing a Falun Dafa parade.

“I think [Falun Gong] is wonderful!” she said. “[The persecution] has been going on for so long, I can’t understand why. I know the regime is very oppressive. I feel for their cause.”

Crystal, who works in Pitt St., felt more energised by the parade.

“The whole atmosphere is very powerful,” she said. “I’ve heard about organ harvesting. I haven’t heard about Falun Gong, that’s new to me. It’s made me more aware, that’s for sure.”

Falun Dafa, also known as Falun Gong, is a spiritual practice that involves meditation exercises and living according to truthfulness, compassion, and tolerance. The practice became very popular after its public introduction in 1992, with official state estimates at 70-100 million people practicing Falun Dafa in China in 1999.

On June 10, 1999, Jiang Zemin established an organisation called the 610 Office which overrides the law to execute his personal orders against Falun Gong, to “ruin their reputation, bankrupt them financially, and destroy them physically.”

Since 1999, more than 3,800 Falun Gong practitioners have been confirmed tortured to death in detention centres. “The actual toll is likely higher, because such information is tightly censored in China,” according to Minghui, a website that documents the persecution of Falun Gong.

“Falun Gong is not a religion or a political movement. They’re just people coming together as I might do on Sunday morning and play touch football with my friends in the park. I don’t join a football club, we just get together and we do it,” said Stephen Sim, a presenter for community radio station 99.3FM, who spoke at the rally in support of the lawsuits against Jiang.

“[Jiang] realised there were more people doing this than there were members of the Communist Party, so he outlawed it overnight,” said Sim.

Though not a Falun Gong practitioner himself, Mr. Sim felt a personal obligation to speak out.

“To know what’s going on and do nothing about it makes you or me equally as guilty,” he said.

With reporting by Melanie Sun.