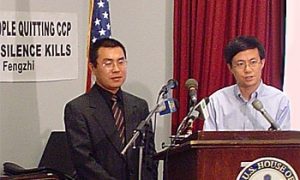 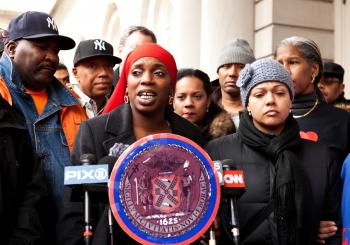 By Gidon Belmaker
Print
NEW YORK—At a press conference at City Hall on Wednesday marking the second “peace week” against violence, community organizations, artists, elected officials and family members of those killed by street violence displayed proclamations from the mayor's office and the City Council officially recognizing the week of Jan. 15-22 as “Peace week.”

Under the leadership of activist Erika Ford's I Love My Life campaign, Peace week is meant to tackle the culture of violence that has affected many innocent lives in New York and across the nation. Ford launched LIFE Camp, Inc. (Love Ignites Freedom through Education) a violence prevention program in schools in 2002, following the tragic killings of two New York City children.

Among the artists and representative that joined Ford were Russell Simmons, founder of rap label Def Jam and one of the leading figures in the rap industry, Rapper Maino, Council members Jumaane Williams, Ydaniz Rodriguez and Julissa Ferreras.

“We all agree that these senseless killings must stop,” said Ford after listing a long list of people affected by violence across the U.S., many of them under the age of 20.

Everyone has his way to help solve this problem, said Ford. legislators can support programs and make gun laws more strict; celebrities can be the voice of the message; men in their communities can stand up and be role models against violence and the media can shed light on the problem, she said.

Rapper Maino, who was in prison for a decade during the 90's, also came to sound his voice against violence. “I had an opportunity to change my life, but a lot of kids don't have the opportunity,” said Maino adding that he knows how it is to be involved in gun violence and to loose friends and family to violence. “I'm here to help the cause!” he said.

In an eerie coincidence, two mothers with a very similar story met at the event for the first time. Joanne Soto, aged 37 from the Bronx lost her son last Decemebr. He was only 17. Shennee Johnson, also 37, lost her son to violence when he was only 17 years old.

“It is becoming too common,” said Johnson after hearing Soto's story.

A few days after getting into a fight with a local drug dealer Soto's son got an invitation to “make peace,” she said with tears welling in her eyes.

“My son always promoted love and peace, and he was always doing the right thing. When my son put out his hand to make peace, in exchange for that, he got shot through his heart and died instantly.”

It is unfair, said Soto, that while she raised her son to have morals and values, his life was taken by a person that did not have the same values.

Shennee Johnson's son, Kedrick Ali Morrow, died just a few weeks before his high school graduation. He was at a party at school, when a fight broke out. He was shot when he stepped in to help a friend.

Johnson is active in Life Camp, led by Erica Ford, a not-for-profit that tries to give a second chance to at-risk youth and to teach them to avoid the pitfalls of incarceration through advocacy and on-the-ground intervention.

Many of the speakers at the press conference talked about the need for government funding to support the grass roots community efforts to prevent violence. “I'm waiting for them [the city] to put their money where their mouth is,” said Johnson in relation to the proclamations.