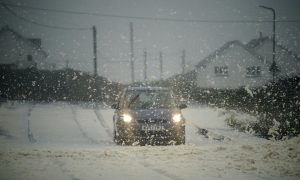 The sight of over 18 British bobbies whizzing around on dodgems at the local fair during a five-minute break was too much to resist for Inspector Scott Snowden.

Together with colleagues, Snowden posted pictures on Twitter celebrating the fun, alongside one image of a police officer “investigating” a dodgem accident and asking for “witnesses”.

But their innocent tweets, together with a video, are being misrepresented as “evidence” of an underresourced police-force wasting time and public money, according to the Humberside police and local journalists.

Local newspapers and people rallied in defence of their force, and Humberside police were forced to issue a statement.

Police attend a two vehicle accident and are appealing for witnesses.
Another great day at the Hull Fair. pic.twitter.com/cVz2v7zDPd

Hull Fair is one of Europe’s largest travelling funfairs, one of the town’s biggest traditions, with a 700-year history. Police keep an eye on the week-long fair and its half million revellers with 20-strong shifts. This year, just four arrests were made—for minor drunkenness.

On the last day of the fair, officers took a break to have some fun on the dodgems and clearly thought nothing of posting their pictures to social media with Inspector Snowden describing it as “well-earned fun”.

Other images show the police interacting and having fun with the public.

Look at the concentration on his face!
Crowds loved supporting PCSO Hampshire but to no avail.? pic.twitter.com/66NFP8IjaC

The pictures, however, have been used out of context to stir outrage, misrepresenting the situation and the views of locals, according to local papers.

Following an article in the Sun which contained criticisms of their actions, Humberside police insisted that not only were their actions innocent, but consistent with good policing.

Deputy Chief Constable Andy McDyer said, “On the final day of the 2017 Hull Fair our officers, who were policing the event, took a five-minute break to have some fun and engage with the fairground organisers by taking to the dodgems.”

By getting involved with the games and fun, officers can show the “human face” of policing, he said in a statement.

Cops having a bit of well earned fun with people at the fair! pic.twitter.com/XEwOeYHrzt

Ch Supt Darren Downs at Hull Fair.
He enjoyed that more than the others! pic.twitter.com/ypaBFVMaSy

Local media shredded the Sun’s article, which suggested that the police had failed to handle incidents at the Fair in a timely manner.

According to the Hull Daily Mail, their reporter Sophie Corcoran was at the fair every night last week. She said: “There were police everywhere, which was really reassuring to see.

“They were really helpful and friendly and it was good to know that if there was any trouble, it wouldn’t take long to find an officer to help. You couldn’t turn a corner without seeing one.”

“Who cares if they took a bit of time out to enjoy the fair? They deserve it.”

Editor of the local Grimsby Telegraph wrote: “What has been encouraging is to see in recent months is Humberside police officers and PCSOs engaging more than ever with the public. We’ve seen them enjoying ice creams at the beach, dancing at festivals or happily posing for pictures with boisterous revellers.

“In the wake of terrible events around the country, armed officers have even encouraged people to come up and talk to them and take selfies.

“So when a few officers decide to take a two-minute whirl on a dodgem at the end of Hull Fair, we say good on them. We’d happily have paid for the ride and for any other officer on duty.”