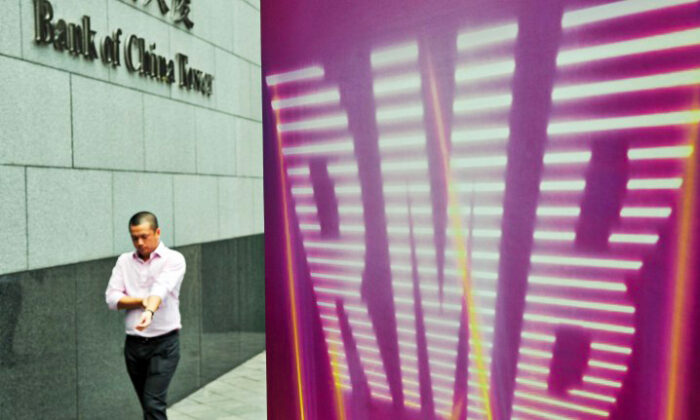 A businessman walks past an RMB (renminbi) poster outside the Bank of China in Hong Kong on Sept. 5, 2011. (Laurent Fievet/AFP/Getty Images)
China Business & Economy

The onshore exchange rate of RMB against the U.S. dollar stopped falling briefly on April 26 under the policy adjustment of the People’s Bank of China (PBOC), but continued falling to close at 6.6115 on April 28, down 546 basis points from the previous trading day. An expert believes that the RMB exchange rate is bound to break 7 in the coming year. An expert from a Chinese Communist Party (CCP) think tank has pointed out that it is difficult for the authorities to retain foreign investment by only stabilizing the exchange rate, which will result in a high level of foreign investment cashing out.

After the RMB exchange rate dropped for five consecutive days, the PBOC announced on the evening of April 25 it would lower the reserve requirement ratio (RRR) for foreign exchange deposits of financial institutions, that is, from the current 9 percent to 8 percent starting May 15. It was the first cut since the PBOC set up the reserve system in November 2004.

However, it is inevitable that the yuan’s value will fall below 7 yuan to the U.S. dollar in the next year, according to Professor Wu Mingde, a senior UK-based banker.

Yuan is not a free currency, Professor Wu told The Epoch Times on April 25. It is controlled, and now the falling of the yuan is just its natural path when government control no long serves the purpose.

On why the dollar is so strong, Professor Wu said said that in order to fight inflation, the Federal Reserve plans to increase interest rates. Rate increases are expected on May 4, in late June, and at the end of July meetings. The dollar has yet to raise rates by more than 0.5 percent after a 0.5 percent increase in 2000. Therefore, the Fed’s future rate increases are expected to be comparable to the strength of former president Reagan’s 1980s fight against inflation of more than 10 percent.

“The most attractive thing about the yuan since Biden came on the scene is that it has higher interest rates than the dollar,” he added.

By April 2022, a large number of foreign investments had left the Chinese market due to the narrowing interest rate gap between China and the United States, the escalation of the pandemic in China, and the geopolitical impact of the Russia-Ukraine war.

Exchange rate fluctuations are the result of foreign capital reducing its holdings of RMB assets, rather than the cause, Guan Tao, an expert at a CCP think tank, said in an article published on April 28.

Regarding the RMB’s 2,000-basis point drop in a week, Chinese media Caixin reported on April 26 that judging from its response so far, the PBOC seems to be more tolerant of the devaluation this time.