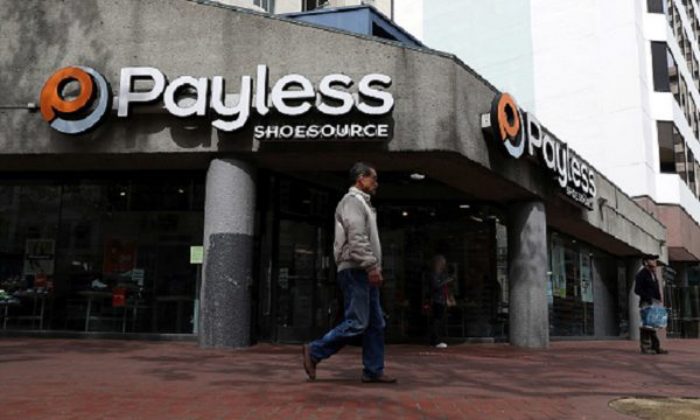 A pedestrian walks by a Payless Shoe Source store in San Francisco, Calif., on April 5, 2017. (Justin Sullivan/Getty Images)
US News

Payless ShoeSource, which was at one time the most popular discount shoe retailer in the United States, announced it has emerged from Chapter 11 bankruptcy and has plans to reopen some of the stores it shuttered last year.

The Topeka, Kansas-based firm said Thursday in a news release that it has appointed a new management team to unveil its new strategy for 2020, naming CEO Jared Margolis as the leader of the group.

The firm said it has emerged from bankruptcy with a number of stores in the Middle East and Latin America, despite closing down more than 2,000 stores across the United States. Currently, across the world, it has 710 “brick and mortar” stores, the company said.

“I am pleased to have the opportunity to lead this iconic retail brand into a new strategic phase with a strengthened balance sheet and clean financial outlook. We will implement a new comprehensive strategic plan to strengthen our relationship with our vendors and suppliers, support our global franchise partners and deepen the trust of our customers,” Margolis said in the release. “The Payless brand stands for design, quality and value, and we plan to reinvigorate that proposition for our customers all over the world.”

However, it will be the second time Payless tries to come up with a new business strategy and reinvent itself after following a bankruptcy filing. In 2017, the chain filed for Chapter 11 protection, and about a year-and-a-half later, it declared itself bankrupt again.

During the first bankruptcy, it had over 4,400 stores in more than 30 countries. Four months later, it merged from restructuring with about 3,500 stores and around $435 million in debt.

At that time, it was controlled by Alden Global Capital. Now, the new management team is from CAA-GBG, of which Margolis formerly served as president.

“We intend to leverage Payless’ existing infrastructure, which is best in class and already includes product design & development, distribution, marketing, and a strong relationship with major footwear manufacturers. Thus, providing the new Payless with the ability to be nimble, innovative, and to fast-track our biggest growth opportunity: The United States,” said Margolis in the latest news release.

In the second bankruptcy case, Payless said it would shutter about 2,500 locations across the United States.

Payless was founded in 1956 by Louis and Shaol Lee Pozez to sell affordable footwear.