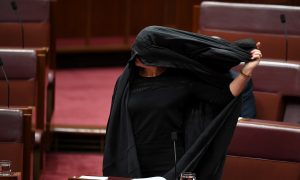 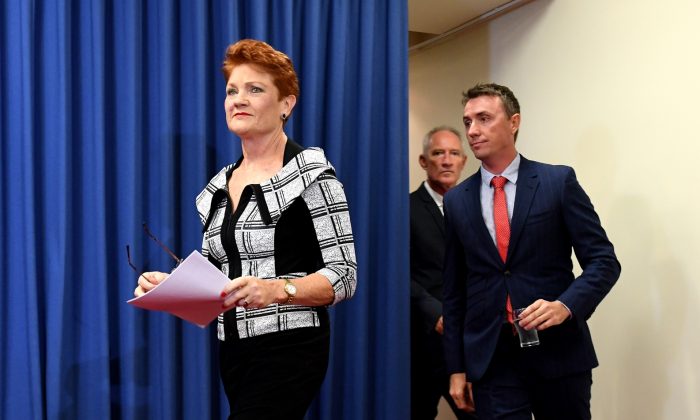 Nationalistic Australian Senator Pauline Hanson staunchly defended herself and colleagues on March 28, over controversial video footage that was aired in an explosive Al Jazeera documentary.

Senator Hanson, leader of the One Nation Party, told Australians at a media conference at the Commonwealth Parliamentary Offices in Brisbane that the footage was an elaborate stitch-up orchestrated by the “Islamist” media network of the Qatari government, Al Jazeera.

“Today is the day of shame on the Australian media who have been sold a story that is too good to be true, and you took it hook, line and sinker,” Hanson said on her first public appearance after recovering from a tick bite. “Media across Australia had been blinded by the hate and bias towards One Nation and myself, and rushed to report on heavily edited footage.”

Please watch my full response to the disgusting Qatari funded, Islamist Al Jazeera hit piece. On the eve of a federal…

“Let me make it very clear to the Australian people. I have never sought donations or political guidance from the NRA.”

Hanson claims she and her staff were hotly pursued by an undercover reporter for the “Islamist organisation” Al Jazeera, Roger Muller, who had posed as a gun rights lobbyist for Gun Rights Australia. It has since been revealed that Gun Rights Australia is a fake advocacy group. Hanson said after she turned down his ceaseless invitations to attend events in the United States with links to gun lobby groups, Muller started approaching her staff. He eventually went ahead to prearrange for her chief of staff, James Ashby, to provide a guest speech at a Congressional Sportsmen’s Foundation event in the United States without her prior agreement. It was on this trip that some of the video footage was taken.

Hanson said she had been the one to approve the trip for Ashby and One Nation Queensland leader Steve Dickson, thinking they could go to visit with the National Rifle Association in the United States to “learn campaigning techniques, meet with other elected officials at the Congressional Sportsmen’s Dinner, and learn about the power and economy of the United States.”

In the video footage, which was first broadcast in Australia on the ABC on March 26, Dickson and Ashby were allegedly conversing with gun lobby groups as Muller secretly taped their conversations. The video showed the men discussing what One Nation could do if it had millions in donations, presumably from the lobby group.

However, Senator Hanson explains the comments aired have been “taken completely out of context.”

“Steve said some stupid things or inappropriate things but I know Steve. Steve is a family man,” she said. “He’s a good man and Steve Dickson would never ever want to water down the gun laws in Australia, the same as I won’t.”

“Let me make it very clear to everyone in this country. One Nation will never water down gun policy in this country,” Hanson added. “One Nation’s firearms policy is one of the strongest and most widely accepted policy in the country. It is stronger than the new laws put forward by the New Zealand Prime Minister, Jacinda Ardern, because One Nation want to take guns off criminals and those on terror watch lists.”

Demoted on the Ballot

Statements shown in the documentary show a timely response from Australian Prime Minister Scott Morrison, who vowed to put One Nation below the opposition left-leaning Labor Party on the centre-right Liberal Party’s how-to-vote card for the upcoming May federal election. Hanson called Morrison a “fool” for having “handed the keys to the Lodge to [Labor Opposition Leader] Bill Shorten.”

Morrison said the decision was spurred by Hanson’s statement in further video footage in which she appeared to question whether the Port Arthur massacre was a government conspiracy.

Hanson later said the “heavily edited” video did not represent her views on the 1996 tragedy. “There is no question in my mind that Martin Bryant was the only person responsible for the murders of 35 innocent lives, and my belief stands today that he should have faced the death penalty,” she said.

Under Australia’s preferential voting system, Morrison’s announcement would mean many moderate or conservative Liberal voters would in effect be favouring the left-leaning Labor party over One Nation, provided they follow the how-to-vote card.

LABOR / LIBERAL PREFERENCE DEAL ANNOUNCEDIt’s come as a shock to most people across the country, but Scott Morrison…

Hanson predicted the change in order of preferences by Morrison would pave the way for a Shorten Labor government.

“This is Australia’s first case of severe political interference from a foreign government,” Hanson said at the press conference. “Qatar is a government that enforces Sharia law, public floggings, genital mutilation, suppression of women, and stoning.”

“This is a political attack by Al Jazeera in cooperation with the ABC,” she added. “If the ABC had any ethical bone in their body, they would refuse to put this unfair and unbalanced story to air tonight.”

Earlier in the week, One Nation had said in a statement, “Al Jazeera are a state-owned propaganda arm of the Qatari government that supports Islamic extremist groups and are not a legitimate media organisation.” It said the party had referred the media report to the Australian Federal Police.

Hanson added that Al Jazeera had refused to release the unedited covert recordings, and that she would continue calling for their release to clear One Nation’s name.

Al Jazeera journalist Peter Charley said he would be delighted to release all the recordings, labelling suggestions the report has been dubbed as “preposterous.”

Australia’s spy agency, Australian Security Intelligence Organisation (ASIO), is currently conducting an investigation into Al Jazeera, according to The Guardian, of which the ABC would have been aware.

It's far from vindication, but Andrew Bolt is the only journalist who's taken the time to report the facts on this…

The ABC defended its decision to air the documentary, saying when the Qatari state-owned media organisation approached them, the public broadcaster acquired the footage in accordance with its usual proceedings.

An ABC spokeswoman said on March 26 the report was consistent with ABC editorial policies and an independent Al Jazeera investigation.

“The ABC assesses all content on its merits, ensuring it is consistent with all ABC editorial policies, including recognised standards of accuracy, impartiality, integrity and fair and honest dealing,” she told the Australian Associated Press.

The second part of the Al Jazeera investigation was broadcast nationally on the ABC on Thursday night and available online throughout the day.

Nationals leader Michael McCormack said he was comfortable with One Nation being above Labor on his party’s how-to-vote cards.

“I’m quite happy with the National Party members determining at a local level … where they put their preferences,” McCormack, who is also the deputy prime minister, told reporters in Darwin.

Australian Conservatives Senator Cory Bernardi told Sky News he would not fall for the “smokescreen” of blaming a foreign media organisation. “Pauline Hanson needs to give these two blokes the flick,” he said.