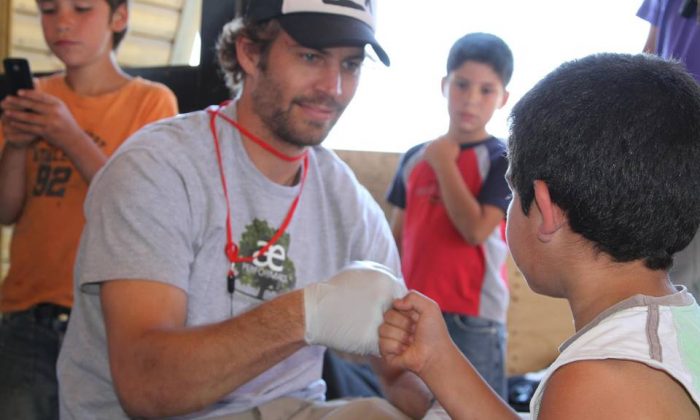 Paul Walker did not fake his own death, as it has been claimed by a conspiracy website. It’s been well-proven that Walker died last month in a fiery crash.

A report on the website Nodisinfo.com that claims Walker faked his death has been marked as “other hoaxes,” and it added it “is not absolutely confirmed” that Walker and driver Roger Rodas both faked their own deaths in the Nov. 30 Porsche crash.

“This hoax was achieved with collaboration of the entire crew and production team of the ‘Fast & Furious’ cabal in collaboration with Universal Studios,” it reads.

On the website, there’s a bunch of blurry and grainy images that supposedly are evidence that Walker and Rodas faked their deaths. It also claims that his girlfriend Jasmine Pilchard-Gosnell was involved in it.

The situation was muddled up even further after the International Business Times published a confusing report saying that his girlfriend was “laughing at fake death” while Walker’s family has been fighting over $45 million in assets. “His tragic death was mourned by millions but also created a rift in the members of his family as they decide on what to do with his millions. But all these could be an act as the ‘Fast and Furious’ actor allegedly faked his own death according to conspiracy theorists,” the IB Times article reads, while citing the Nodisinfo.com report.

On Twitter and other social media networks, users complained about the Nodisinfo report.

“Why would they fake their death to begin with? What is to gain? You’ve presented all of this ‘evidence’ of a faked death and have failed to answer WHY they would even do so to begin with,” wrote one. “You’ve just plain failed. Have a little RESPECT for the dead and their loved ones by shutting up and ceasing to spread your moronic views and distracting them from mourning.”

It’s been proven that both Walker and Rodas died in the crash earlier this month.

According to The Associated Press, a law enforcement official said that Rodas “lost control” of the vehicle when they went around a curve in Southern California.

“We’re looking at speed and speed alone,” a law enforcement official with knowledge of the investigation told AP.

Coroners said that Rodas and Walker were killed in the crash. Multiple witnesses also confirmed their deaths, AP reported.

This week, Universal Studios announced Monday that the “Fast & Furious” sequel will be released in April 2015, instead of July next year. Shooting on the film was about halfway finished when the 40-year-old Walker died in a car crash outside of Los Angeles.

Walker still will appear in the film, though Universal has not said exactly how it will handle his unfinished performance.

Co-star Vin Diesel first posted the news on Facebook, telling his fans that, “He’d want you to know first.”

The franchise has been one of Universal’s most lucrative, grossing almost $2.4 billion worldwide since 2001. The last film, “Fast & Furious 6,” made $789 million.