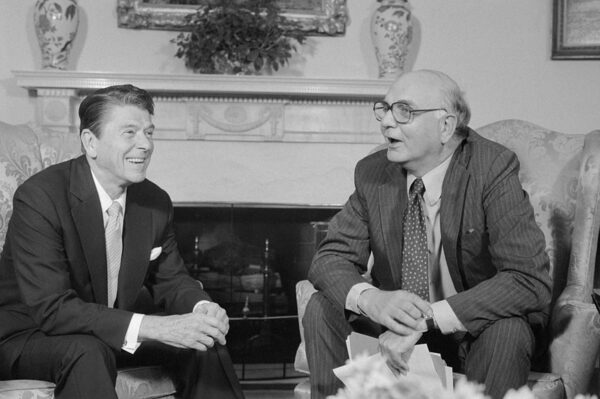 President Reagan meets with Paul Volcker, chairman of the Federal Reserve Board, in the Oval Office, on July 16, 1981. (Bettman/Getty Image)
Business Columnists

Paul Volcker and 1982—Why Now Isn’t Then

Jerome Powell isn’t Paul Volcker, and this isn’t 1982. As of late, market analysts are stumbling all over themselves, trying to outdo each other on the “why this time is different” related to the Federal Reserve’s ongoing inflation fight. One of the more interesting comparisons came from the always uber-bullish Tom Lee of FundStrat.

He argues that the market setup is similar to what investors experienced in August 1982. Then, a strong rally in equity markets took place as the Fed began to pivot away from its inflation fight. In the summer of 1982, the U.S. economy was in recession, and then-Fed Chair Paul Volcker had not yet signaled whether the Fed would ease up in its campaign to slow inflation. ‌In October that year, Volcker signaled the Fed could temper efforts to slow inflation.

“The forces are there that would push the economy toward recovery. I would think that the policy objective should be to sustain that recovery.”

Two months before the pivot, markets sniffed out the Fed’s plans. Over the next four months, the losses from the 22-month bear market that saw the S&P 500 Index fall by 27 percent were reversed.

When it comes to the financial markets, Sir John Templeton once said:

“The four most dangerous words in investing are ‘this time is different.’”

While that is a true statement, particularly when it comes to excuses as to why bull markets can continue indefinitely, there are differences in historical comparisons. When an analyst cherry picks a random point in market history to base his or her investment thesis, one should take the idea with a heavy dose of salt. The reason is, “this time is different.” Every period is different, due to the differences in the makeup of the economy, markets, consumption, production, debt, and a litany of other domestic and global factors.

To say 2022 is like 1982 is a dangerous statement, particularly when 1982 is taken entirely out of the context of what preceded it.

But, as the radio broadcaster Paul Harvey used to say, in a moment you’ll know “… the rest of the story.”

The road to 1982 didn’t start in 1980. The buildup of inflation was in the works long before the Arab oil embargo in 1979. Economic growth, wages, and savings rates catalyzed “demand push” inflation. In other words, as economic growth increased, economic demand led to higher prices and wages.

What is notable about that period is that it was the culmination of events following World War II.

Postwar, America became the “last man standing.” France, England, Russia, Germany, Poland, Japan, and other nations were devastated, with little ability to produce for themselves. Here, America found its most substantial run of economic growth as the “boys of war” returned home to start rebuilding a war-ravaged globe.

But that was just the start of it.

In the late 1950s, America stepped into the abyss as humankind took its first steps into space. The space race, which lasted nearly two decades, led to leaps in innovation and technology that paved the wave for the future of America.

Furthermore, the government ran no deficit, and household debt to net worth was about 60 percent. So, while inflation was increasing and interest rates rose in tandem, the average household could sustain its living standard. The chart shows the difference between household debt versus incomes in the pre- and post-financialization eras.

What was most notable is the Fed’s inflation fight didn’t start in 1980, but persisted through the entirety of the 1960s and 1970s. As shown, as economic growth expanded, increasing wages and savings, the entire period was marked by inflation surges. Repeatedly, the Fed took action to slow inflationary pressures, which resulted in repeated market and economic downturns.

The road to 1982 was not a smooth one, but, notably, while Mr. Lee suggests a Fed pivot would incite a similar market response, there is some additional history worth reviewing for important context. The 1960s and 1970s were not kind to investors. As noted, the Federal Reserve steadily fought the repeated bouts of inflation. The resulting market volatility pounded investors with recurring bear markets and economic recessions. While many market observers focus on the 1974 bear market, most don’t realize there were three preceding bear markets. On an inflation-adjusted basis, real returns for investors over the entire period were poor; by the time 1982 arrived, valuations had fallen from 23 times earnings to 7 times.

Given the high valuation levels, inflation, and an aggressive Fed emulating Paul Volcker, it is unlikely markets will repeat 1982.

There are many differences between the Paul Volcker era and today, and none for the better. With the federal government running a deep deficit, with debt exceeding $30 trillion, consumer debt at record levels, and economic growth rates fragile, the ability of consumers to withstand higher rates of inflation and interest rates is limited. As noted previously, the gap between income and savings to sustain the standard of living is at record levels.

The current financial difficulties make weathering an aggressive Fed more difficult for households. A sustained bull market is challenging to anticipate, as households comprise most of the economic activity. Such is what ultimately translates into corporate earnings.

While Mr. Lee hopes the Fed will “pivot,” as noted previously, there are a few reasons to expect such. To wit:

“Currently, there are NO signs of financial stress, much less instability. From the Federal Reserve’s perspective, despite the decline in asset markets in 2022, investors are still 23 percent higher than at the market’s peak in 2020. Absent a disorderly meltdown, the Fed will remain focused on stocks being still above their pre-crisis peak. Secondly, while credit spreads have risen, they are still well controlled, suggesting that financial stress in the credit markets remains low.”

Furthermore, even if the Fed does “pause,” such is far different than cutting rates to zero and restarting quantitative easing. Those actions would occur given an increase in financial instability, suggesting much lower asset prices in the process.

Given the current market dynamics, it is worth looking back at 1973–74 period. That was when the Fed was last aggressively fighting high inflation levels.

It may be no coincidence that market behavior is similar.

While this time is not the same as the previous, there also are vast differences between today and 1982. While current Fed Chair Jerome Powell is at present emulating Paul Volcker, there is a significant probability the outcome could be vastly different.