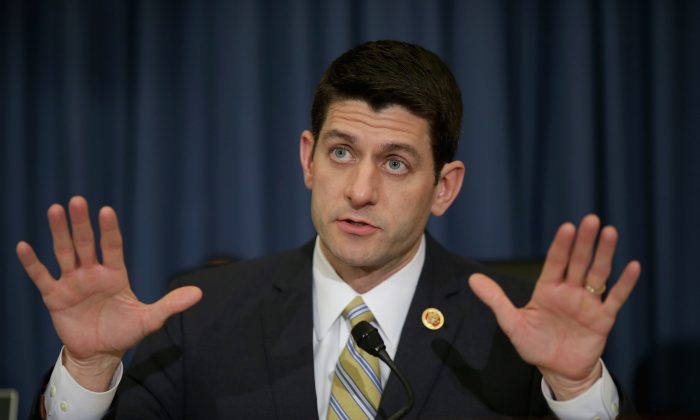 Paul Ryan’s Entitlement Reforms Offer an Elixir for the Poor

Poverty is as endemic today as it was when President Lyndon Johnson inaugurated the War on Poverty, and Rep. Paul Ryan (R-Wis.) is offering sensible proposals to change things for the better.

He would offer states block grants to create programs that both directly aid the poor and remove disincentives to work and create jobs. That would reduce dependence on federal handouts and launch a frontal assault on the declining work ethic and unemployment in America.

During the Great Recession, unemployment peaked at 10 percent. It has since fallen to 6.1 percent, but virtually all that progress has been accomplished by encouraging more people to quit looking for a job and hence not be counted in the jobless data.

The burden of a depressed labor market and stagnant wages has fallen most heavily on workers at the bottom—those earning the minimum wage or a bit more.

Long ago, liberals gave up on creating an economy that puts less skilled Americans into decent paying jobs. Instead, they view poverty and the alleged exploitation of the working poor as an endemic condition of capitalism that must be corrected by government intervention.

For example, the government requires businesses to pay minimum wages higher than worker productivity justifies and ladles on all kinds of means-tested social programs.

Food stamps, cash-welfare, rent and mortgage assistance, and the rest generally phase down as family incomes rise, and together impose an effective marginal tax rate up to 40 percent to 50 percent as the working poor pull themselves up and earn more money.

And many programs encourage single mothers and one partner in two-adult households not to work, or work only part time, rather than lose benefits.

Immigrants who have entered the country illegally have much more difficulty qualifying for the full range of benefits and have more incentive to take lower-paying jobs and work long hours.

Since President Bill Clinton left office, the U.S. economy has created only 6 million jobs, which is less than one-sixth the pace of the prior two decades, and according to a June study published by the Center for Immigration Studies, immigrants—those entering the country legally and illegally—have captured virtually all of those jobs.

Many native-born Americans are working only part-time or opting out of work altogether to cash in on the plethora of payments the federal government offers for being poor.

And Democrats have been all too happy to encourage illegal immigration, through lax border enforcement, to fill the jobs their “anti-poverty” programs pay constituents not to take. Those tactics curry favor with Hispanic voters who want amnesty for immigrants who have entered the United States without permission or at least federal non-enforcement of immigration laws.

Once those immigrants have children, they are here to stay, and the children will eventually become reliable Democratic voters, too.

That makes great sense, because for many without formal education, more-valuable marketable skills are acquired directly on the job or by starting a modest enterprise.

The legions of once minimum-wage workers who are now managers at Wal-Mart and Target, and even franchise owners in organizations such as McDonald’s, bear strong witness to two fundamentals that should guide efforts to alleviate poverty: The best social program is a job, and the best way to get a good job is to be employed in the first place.

Ryan’s proposals will face ridicule from liberal politicians and the media, because if implemented, his reforms would violate two of their most strongly held beliefs: The poor are the victims of capitalist greed and free market madness, and the best way to buy a vote is with a social program.

Sorry liberals, it is time to take your toys away.