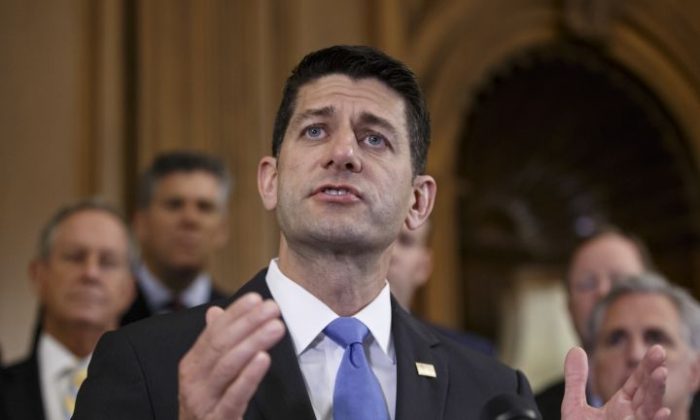 Paul Ryan Announces Who He Voted For

House Speaker Paul Ryan said that he’s voted for Donald Trump, but he’s still not going to campaign with him.

Ryan said on Tuesday on Fox News’ “Fox and Friends” that he used early voting to cast his ballot for the Republican presidential nominee last week.

Trump is campaigning on Tuesday in Ryan’s home state of Wisconsin, but the House Speaker won’t be joining him. Ryan said he hadn’t been aware of Trump’s travel plans until 10 minutes before the Fox interview and would be in Indiana then. Trump’s travel plans had been announced at least a day in advance.

How Secure Is Your Vote?

Ryan and Trump have had a rocky relationship and Ryan has previously said he wouldn’t campaign for Trump.

But Ryan said “we’ve worked with our nominee” on health care, national security, tax reform, and other policy proposals.

Ryan also expressed confidence Tuesday that House Republicans will re-elect him to his post for the next Congress, but didn’t rule out that disgruntled GOP lawmakers might scuttle that plan.

“I serve at the pleasure of our members,” Ryan, R-Wis., said when asked on Fox News whether he would step aside if Republican lawmakers wanted him to do so. But he added, “I feel very good where I am.”

Gov. John Kasich Reveals Who He Voted For

A small number of Republicans, including members of the hard-right House Freedom Caucus, have suggested that GOP lawmakers should reconsider their leadership team after the Nov. 8 elections. House Republicans are scheduled to meet in mid-November, when Congress returns to the Capitol, to pick their leaders for next year’s Congress.

Ryan retains the support of a strong majority of congressional Republicans. But some GOP lawmakers are unhappy that he distanced himself from Republican presidential nominee Donald Trump and didn’t campaign for him. Others aren’t certain he’s conservative enough when it comes to cutting federal spending and on other issues.

“All the rest of this stuff will sort itself out,” Ryan said on Fox. “I’m very confident where I stand with our members,” and he added he is “happy to serve.”

New Poll Finds Trump up by 1 Point Over Clinton