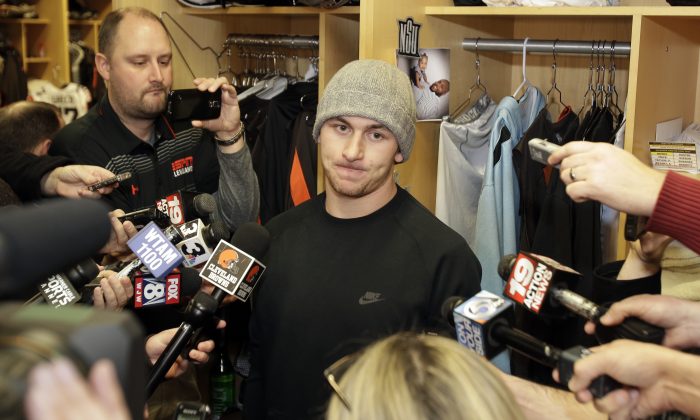 Johnny Manziel, the Cleveland Browns quarterback, is reportedly in rehab for drinking.

His father elaborated on the situation with his son months ago.

“I don’t enjoy playing golf with him because I don’t want to see that temper,” Paul Manziel was quoted as saying by ESPN.

“I honestly do not. I cringe when he wants to play golf. . . . I don’t know where the anger comes from. I don’t think he knows. If it comes from his drinking, or if he’s mad at himself for not being a better person when he fails, when he fails God and his mom and me. If it makes him angry that he’s got demons in him. You can only speculate because you can’t go in there.”

As NBC notes: “Manziel’s parents and his college coach required Manziel to visit with an alcohol counselor after an alcohol-related arrest. Paul Manziel also expressed concern about a temper that made the father reluctant to engage in one of the ultimate father-son activities.”

The Browns also issued a statement regarding Manziel’s decision. It says:

“We respect Johnny’s initiative in this decision and will fully support him throughout this process. Our players’ health and well-being will always be of the utmost importance to the Cleveland Browns. We continually strive to create a supportive environment and provide the appropriate resources, with our foremost focus being on the individual and not just the football player. Johnny’s privacy will be respected by us during this very important period and we hope that others will do the same.”

Following the Browns’ playoff-less season, Manziel said he wants to do better. “It’s about actions, it’s about being accountable instead of looking like a jackass,” he said.