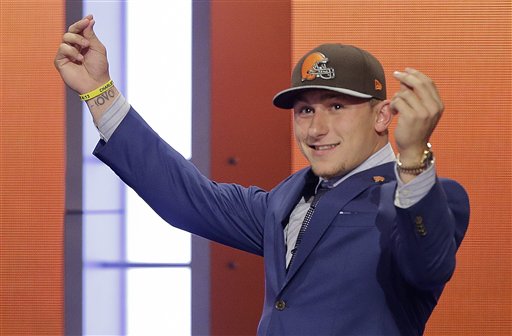 Texas A&M quarterback Johnny Manziel reacts after being selected by the Cleveland Browns as the 22nd pick in the first round of the 2014 NFL Draft, Thursday, May 8, 2014, in New York. (AP Photo/Frank Franklin II)
Sports

Paul Manziel and Michelle Manziel–Johnny Manziel’s parents–have come under scrutiny over the years as their son blossomed into a football star.

Johnny was chosen this week by the Cleveland Browns in the first round of the NFL draft.

Turns out the family is already rich even before Manziel signed a big contract with Nike and not including the contract he’ll sign with the Browns.

ESPN reported that Paul is the grandson of a Texas oil fortune, which still funds the family–and enough remains that Johnny hasn’t wanted for anything.

Paul and Michelle had a tough time raising Johnny with the growing fame and Johnny’s notorious wild child ways. Paul made him a deal one time that he would buy him a new car if he stayed away from alcohol in his junior and senior years in high school. But Manziel was arrested at a Wal-Mart when a security guard smelled alcohol.

Paul picked up Johnny from jail the next day, sold the car, and replaced it with a busted pickup truck, according to the New York Times. Johnny was also arrested in his freshman year for drinking and carrying a false identification.

The fame surrounding Johnny grew to be so much that his parents had to pay for security guards every time Johnny goes out, his personal assistant Nate Fitch told ESPN.

But whatever the case, he’s made it to the NFL.

As for his parents, they were bartenders when Johnny was born. Michelle later got into real estate and Paul sold cars and built homes.

It’s unclear if they’re still working, as is their net worth.

They may have sold their home near College Station by now after listing it in fall 2013.

There was plenty of giddiness from Johnny Manziel’s detractors when he sat around for the better part of three hours, watching one player after another go ahead of him in the NFL draft.

In the end, though, the brash quarterback landed with the perfect team — the perfect city, really, a place that has been yearning for someone, anyone, to cheer since LeBron James bolted for South Beach.

That was apparent Friday, when the Cleveland Browns tried to keep up with the demand for tickets and welcomed Manziel to town with the adulation normally reserved for reality stars and cats playing the piano on YouTube.

While there’s a danger in all this — at some point, he has to turn off the rock-star persona and get to work — the guess here is that Manziel will be a big hit in his new home.

He’s simply too good to fail.

“I’m going to continue to get better as a football player,” Manziel vowed. “I didn’t go into this process saying I had it all figured out.”

There will be struggles, of course. All rookies go through an adjustment period when they get to the NFL — especially when you’re talking about a quarterback who is just 21 years old, who played just two years of college ball at Texas A&M.

Manziel’s style will get plenty of scrutiny, too. He is surely not the prototype quarterback, being a shade under 6 feet, a guy who dazzles with his speed as well as his arm, who thrives more on improvisation than he does with set plays. The key for the Browns will be finding a way to hone those skills, to letManziel be Manziel while gradually reining in the sort of anything-goes mindset that won’t fly in the NFL.

“Obviously,” he said, “I know there are times I need to play with more structure.”

To a large extent, this is Michael Vick all over again.

Manziel and the Browns would be well-served to study that blueprint, borrowing from all the good and the bad that defined Vick’s career after he was picked No. 1 overall by the Atlanta Falcons in 2001.

As Vick showed, there’s a place in the league for someone who simply does things that no one else can do. In four full-time seasons as Atlanta’s quarterback, he led the downtrodden Falcons to a division title, two playoff appearances, and came up one win shy of the Super Bowl during the 2004 season.

The Browns — who have made one playoff appearance in the last 15 years, haven’t won a postseason game since 1994 — would take Vick’s early resume right now. Clearly, this thing can work as long as the team is willing to live with some of the inevitable mistakes, to accept the thrilling “Did you see what he just did!” moments right along with the occasional groans of “Did you see what he just did?”

As Vick also showed, there’s no place in the league for someone who doesn’t grow as a player and a person. He never did the behind-the-scenes work that was needed to gradually hone his style into more of a traditional passer, to reduce the pounding on his body so he was better served for the long haul.

Vick was often the last one to arrive and the first one to leave the training facility in Atlanta, the Falcons pampering him so much that he grew to feel untouchable. It was no surprise when he ran into troubles off the field, culminating with a bust for dog fighting that sent him to prison in what should’ve been the prime of his career.

One thing Manziel has going for him that Vick didn’t was the motivation of being passed over by so many teams. The great ones know how to turn every little slight into a reason to beat the guy in the other uniform. Manziel will probably never forget how angry he felt on draft night, a camera in his face and the barbs flying on Twitter as his frustration grew for the whole world to see until he was chosen at No. 22.

Twelve of Cleveland’s 16 games next season are against teams that could’ve picked him but didn’t. He’s surely got all of them circled already.

“There are a lot of teams that did pass me up,” Manziel said not long after he was finally taken. “You do grow a little bit of a chip.”

The key for the Browns is to create the sort of environment where Manziel’s personality can thrive, which is a large part of the finger-rubbing “money” player he is, but to make it clear he’ll be expected to carry himself as a leader. That means working harder than anyone else. That means showing signs of maturity from season to season. That means putting the team ahead of his visions of stardom.

It’s won’t be easy. There will inevitably be stumbles along the way. But if the Browns — and Manziel — stay on something resembling the right course, this quarterback graveyard finally has the guy who can eventually lead Cleveland to a championship.