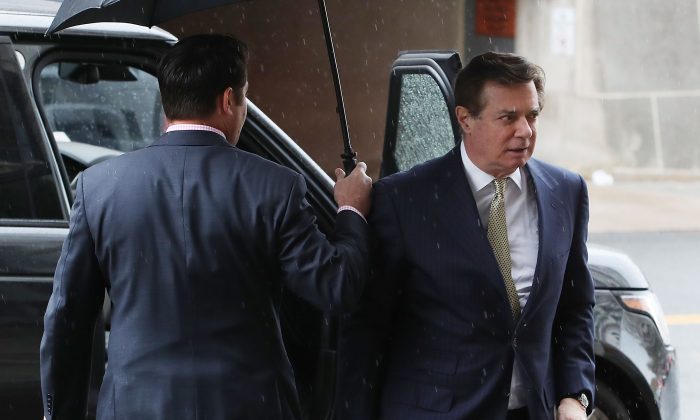 Early in 2018, Franklin Foer published a cover story in The Atlantic titled “The Plot Against America: Paul Manafort and the Fall of Washington.” I think he inadvertently stumbled onto something.

Several points popped out that I can’t stop thinking about, especially now that Manafort is back in the special counsel’s crosshairs, and potentially faces a prison sentence that could well be a death sentence for the 69-year-old. They made me wonder then and they make me wonder now: Was the introduction of Manafort into the Trump campaign itself a “plot against America?”

The Foer article opens with a shocking sequence about Manafort’s time under medical care in 2015:

“The clinic permitted Paul Manafort one 10-minute call each day. And each day, he would use it to ring his wife from Arizona, his voice often soaked in tears. ‘Apparently he sobs daily,’ his daughter Andrea, then 29, texted a friend. During the spring of 2015, Manafort’s life had tipped into a deep trough. A few months earlier, he had intimated to his other daughter, Jessica, that suicide was a possibility. He would ‘be gone forever,’ she texted Andrea.”

On March 29, 2016, less than one year after sinking to these dark depths, Manafort joined the Trump campaign as convention floor manager. He became chairman of the campaign on May 19, 2016.

What follows are the salient points from the Foer piece in chronological order.

Foer didn’t tell us when Manafort left the clinic. He backed into Manafort’s departure in the context of the newly discharged patient’s reportedly desperate effort to gain access to Donald Trump.

He opened the section this way: “’I really need to get to’ Trump, Manafort told an old friend, the real-estate magnate Tom Barrack, in the early months of 2016.”

Foer didn’t get more specific about the date of this conversation; however, the distinctive quotation, “I really need to get to,” has its provenance in a Washington Post piece based on interviews with Barrack, who dated his conversation with Manafort as shortly after the Iowa caucuses, which were Feb. 1, 2016.

“Barrack, a confidante of Trump for some 40 years, had known Manafort even longer. When Manafort asked for Barrack’s help grabbing Trump’s attention, he readily supplied it. Manafort’s spell in the Arizona clinic had ended,” wrote Foer.

All of this is more than strange.

First, about Thomas Barrack Jr., an American billionaire of Syrian extraction. As an Arabic-speaking lawyer in 1972, the Washington Post reported, Barrack played some squash with a set of Saudi princes and thus became “the American representative of ‘the boys.’ ”  There was no word on whether Barrack had registered as a Saudi agent for this work for the Saudi family dictatorship. “Barrack spent many hours listening to the Arabs discuss their world, which he said gave him ‘great respect for the society and community,’ ” the Post continued.

It sounds as if Barrack’s “respect” paid off. In 1979, he bought a California ranch “just down a hill from Ronald Reagan’s Rancho del Cielo.” (Quelle coincidence!) The Post continued: “The Secret Service later boarded horses at Barrack’s ranch, and he occasionally went on trail rides and sat around campfires with Reagan. ‘I loved him,’ Barrack said of Reagan.”

That’s beautiful. Anyway, back to Manafort. It’s early 2016. Manafort has debts, he has a Putin-linked-oligarch looking for that $19 million he “invested,” his family life is chaos, and what does he do? He calls up Barrack after Iowa and says: ” ‘I really need to get to’ Trump.”

The story said Manafort and Barrack go back 40 years to Barrack’s Saudi princes days. They met in Beirut when Manafort “represented a firm doing business with a Saudi construction company.” Barrack has known Trump for nearly as long, and depicts himself as a huge loyalist—although he is also openly horrified about Trump’s politics, including his signature issues of immigration and the Muslim ban.

Gee, something isn’t quite adding up here …

According to the Post: “Barrack supported Trump’s campaign, and shortly after Trump lost the Iowa caucuses, he [Barrack] reconnected with his old friend Manafort, a longtime Republican consultant.”

Barrack “reconnected” with Manafort? The Atlantic had it the other way around.

In any case, it’s February 2016 and the two men are talking. At this earliest stage of the primary season, Manafort supposedly tells Barrack he wants to work as “Trump’s convention manager” now that Trump has lost the Iowa caucuses. Does that make sense? I’ll bet Deripaska’s $19 million this is not the way that initial conversation went. Maybe it went more like this: You really need to get to Trump, and here’s how we’re gonna do it …

The Atlantic did not report this intervention by Barrack. Instead, the Trump connection was almost entirely Manafort’s doing as a matter of his professional salvation. Foer wrote: “With the arrival of Donald Trump, Manafort smelled an opportunity to regain his losses, and to return to relevance.”

Sorry to say so, but this sounds as absurd as Barrack’s claim that Manafort told him he wanted to be “convention floor manager” right after Trump lost Iowa. In the early months of 2016 and right up to election night, Trump was the political equivalent of the bubonic plague, refrigerator mold, and Hitler in the eyes of all Washington, including every member of the GOP establishment whom Manafort had ever billed or hoped to—all of whom were endlessly predicting Trump’s elimination and epic loss in a historic landslide.

Any political professional even contemplating a stint on the Trump campaign was immediately threatened with shaming, excommunication, ostracism, financial ruin, purging, even “epuration sauvage.” Thus, it seems highly unlikely that Manafort would look at Trump and see a meal ticket to big time.

According to Foer, financially flailing Manfort then offered his services to Trump “free of charge”—nine long months before Election Day—to seem like a “near-equal.”

In the Post piece, Barrack is the author of an email he sent to Ivanka and Kushner that urged the campaign to hire Manafort. In the Atlantic piece, Barrack’s role was no more than conduit of a “memo” Manafort wrote to the Trump team.

The Manafort message? According to Foer, “Barrack forwarded to Trump’s team a memo Manafort had written … [told] Trump that he had ‘avoided the political establishment in Washington since 2005,’ and [described] himself as a lifelong enemy of Karl Rove. …”

Hook, line, and sinker, it would seem.

The instigating role of former Saudi “representative” Barrack in the hiring of Manafort is absent from the Atlantic piece; however, it brought to light information that might explain why Manafort was tapped for delivery to Team Trump in the first place: In his broken state of mind and career, Manafort was the perfect vehicle for someone else to crash the campaign.

To put it another way, after Manafort’s 2014 financial smash and 2015 breakdown, this once high-priced Igor to Global Crookdom was shattered goods—humanly, financially, politically, and legally. He was a walking time bomb for any of Trump’s political enemies to maneuver into the Trump camp and then wait for Manafort’s toxic life story to explode all over Trump.

If this was the case, who set the trap?