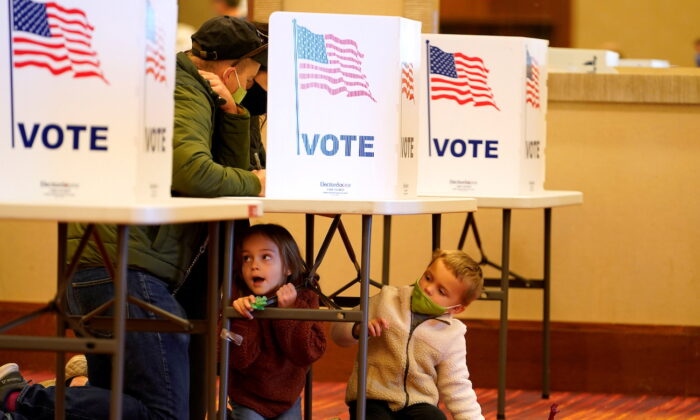 People fill out their ballots at a polling center on Election Day in Jeffersontown, Kentucky, on Nov. 3, 2020. (Bryan Woolston/TPX Images of the Day/Reuters)
Politics

Kentucky may be famous for electrifying horse races, but the state’s only unpredictable national primary race is between two Democrat House candidates.

As a solidly Republican state, Kentucky is likely to send six Republican incumbents to House and Senate Seats.

The most important candidate currently facing a primary election is Senator Rand Paul, who currently serves on committees that cover topics from foreign policy to small businesses.

The only primary race likely to result in a surprise is also in Kentucky’s only Democratic district. It pitches a Democrat with strong endorsements from the state’s Democratic Party against another who boasts support from several activist organizations.

In 2022, Kentucky has one Senate seat up for election. The current incumbent, Rand Paul, is the likely winner of both the primary and general elections.

Rand Paul is a social conservative with some libertarian leanings. His campaign issues page states that he is pro-life, pro-military to preserve peace, pro-prison reform, and pro-Bill of Rights.

Another campaign issue for Paul is increased government investment in infrastructure.

Although the Paul campaign disapproves of the way Democrats demanded billions of dollars for infrastructure, his campaign wants more infrastructure investment.

Paul’s campaign also states that he is in favor of firing Dr. Anthony Fauci, the Chief Medical Advisor to President Joe Biden.

“Thanks to public email records, we know for certain that Dr. Fauci has been ignoring good advice, and lying about everything from masks to the contagiousness of the virus. It’s time to say enough is enough and fire Fauci,” Paul’s website reads.

Although Paul has introduced legislation that would impose a term limit on Senate candidates of two terms, he is currently running for his third term.

Paul has an endorsement from former president Donald Trump. He faces primary challenges from several Republican candidates, including Val Fredrick. But they’re all unlikely to succeed.

Her site also states that Paul supported keeping Plan B legal. Plan B is a contraceptive pill that might cause abortions.

“We are currently a slave nation because the governing does not have the consent of the governed,” Fredrick claimed.

However, it’s unlikely that Fredrick or any other Republican candidate can beat Paul. In the last Senate election, Paul won by 15 points.

In the Democratic Senate primary, the leading candidate is Charles Booker.

Booker’s website states he is in favor of “Good quality health care and a living wage. And we will make environmental injustice a thing of the past.”

He has endorsements from anti-Trump activism group Indivisible, local chapters of the IUE-CWA and CWA manufacturing unions, and from U.S. Senator Elizabeth Warren.

However, it’s unlikely that Booker goes further than winning the Democratic primary. With Rand Paul’s $12.7 million in campaign funds to his $2.3 million and Kentucky’s strong preference for Republican candidates, he faces an uphill battle.

In solidly Republican Kentucky, five of the six House races are will likely be Republican victories by the same incumbents that held seats last election.

However, Kentucky’s Third Congressional District has some upset potential.

The Third Congressional District is Kentucky’s only Democratic district, and the only one without an incumbent candidate. Democrat Rep. John Yarmuth announced that he wouldn’t seek reelection in 2022.

Yarmuth was the chairman of the House Budget Committee.

In Congress, he voted for higher taxes, increased government spending, gun control, abortion for unborn babies who can feel pain, and the Equality Act, which would have made sexual orientation and gender identity protected classes under federal law.

Republicans are unlikely to win in the Democrat-dominated District 3. But Democrats Morgan McGarvey and Attica Scott are both running for Yarmuth’s seat.

Their agendas are similar to each other and to Yarmuth’s. Both support criminal justice reform, legal marijuana, fighting climate change, and increased laws in favor of homosexuality and transgenderism.

However, Scott’s online platform is far more complex than the brief agenda McGarvey mentioned in his first campaign commercial.

Both Scott and McGarvey have previously held political office in Kentucky, but they received endorsements from very different groups.

McGarvey also seems to favor local Democrats. He only started his campaign after Yarmuth announced he would not run.

In contrast, Scott started her campaign before Yarmuth’s announcement.

Scott proudly identifies herself as an activist on her campaign site.