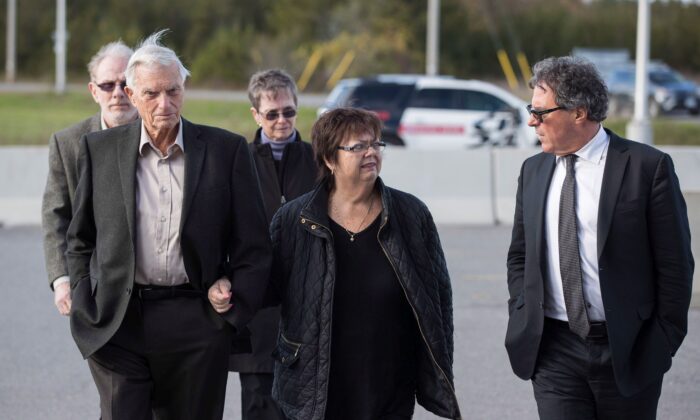 Child killer and serial rapist Paul Bernardo was denied parole on June 22, marking the second time since 2018 that the dangerous offender has appealed for his release.

In a related case, the families of Bernardo’s victims, Kristen French and Leslie Mahaffy, are suing the Parole Board of Canada in federal court for the release of evidence or reports pertaining to Bernardo’s possible release that their Access to Information requests failed to produce.

Tim Danson, the families’ lawyer, told The Epoch Times that given the extraordinary nature of the case, this information should be made public.

“Whether or not the offender represents a threat to public safety—we don’t get access to any documentation that informs that issue until the board members are questioning Bernardo,” Danson said.

“That needs to be changed because the way it’s set up now is just not acceptable. That’s what the lawsuit is about. That would never happen in the regular court system.”

Bernardo is serving two concurrent life sentences for the kidnapping, rape, and murder of Mahaffy and French, crimes he committed with accomplice and now ex-wife Karla Homolka in the early 1990s.

Homolka cut a plea deal, testified against Bernardo, and served 12 years for manslaughter, though videotapes that later surfaced fully implicate her.

While regular federal inmates are typically released after completing two-thirds of their sentence (unless the Correctional Service of Canada deems otherwise), first-degree murder convictions mean 25 years in prison before even being eligible for release.

February 2018 marked 25 years since Bernardo was put behind bars for the French and Mahaffy slayings. He is also considered the perpetrator of more than a dozen violent rapes—10 he’s confessed to—as well as the death of Homolka’s 15-year-old sister Tammy, who was drugged and raped by the pair in December 1990.

When Bernardo was convicted in 1995, his sentence also came with the court’s “dangerous offender” designation that Danson believes should be addressed as a separate matter before such inmates get a chance at a parole hearing.

“My view is that the parole board has to have just overwhelming, compelling expert evidence that repudiates the evidence that existed at the time of the dangerous offender designation, and that process should go first,” he said.

“But the parole board says ‘no, we’re going to do it together because ultimately, our determination is based on whether the offender represents an undue risk to public safety.’ I disagree with that. I think there’s a principled analytical distinction to be made between the two, but the board won’t bifurcate it.”

In addition to these changes to Canada’s parole system, Danson and his clients are advocating for extending the waiting period between parole applications from one to five years after an unsuccessful attempt.

He said the board hearings are traumatizing to the families’ victims and procedurally unfair.

“It’s really a gut-wrenching experience for them. It brings all the horrific memories back and the time between [Bernardo’s request] and the actual hearing—about two years—goes by very, very fast when you’re in their shoes.”

A Parole Board of Canada (PBC) spokesperson said the board can’t comment on the lawsuit as it’s before the courts, but noted that all offenders in federal custody are eligible for parole consideration at some point in their sentence.

“Parole is not automatic, and the paramount consideration in all PBC decisions is the protection of society,” Jésula Drouillard said in an email

“The PBC recognizes the important role that victims play in the conditional release process, and strives to be sensitive and accommodating to their needs within the scope of its mandate and governing laws.”

Notorious serial killer and rapist Clifford Olson, who confessed to killing 11 children and teenagers, died in prison of terminal cancer at age 71, but not before making two appearances at the parole board under a now-defunct “faint hope clause.”

Changes to the parole system that Olson helped precipitate, like phasing out the faint hope clause and ending early parole for first-degree murder, have kept Bernardo from a parole board a decade longer than Olson, Danson noted.

“If we’re successful in federal court, and the parole system will need to be as transparent as the rest of our justice system, then we think that will enhance public appreciation of the issues that the parole board’s considering, which is whether or not these offenders represent an unmanageable threat to public safety,” he said.

“Someone like Bernardo should never be paroled because there’s no cure for psychopathy.”