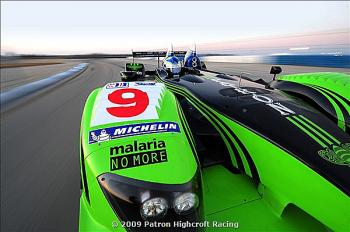 Patrón Highcroft, which campaigns an LMP1 Acura, has teamed up with Malaria No More, a non-profit organization working to end malaria deaths in Africa by providing access to malaria prevention and treatment tools—including life-saving mosquito nets—by the end of 2010.

Malaria is a blood disease transmitted from person to person by certain types of mosquitoes. The disease kills almost one million people every year—most of them young children in Africa.

However, a simple $10 mosquito net can protect two children or a mother and baby, reducing the spread of the disease, saving lives and keeping families intact.

To help combat the problem, Patrón Highcroft Racing and Malaria No More have launched the "Miles to End Malaria" campaign. This new fundraising effort will allow race fans to join forces with the team to tackle the disease.

Patrón Highcroft Racing will kick off the fundraising efforts by donating five dollars for every mile the team completes in the 2009 race season—approximately 4,500 miles—to Malaria No More. Team sponsor Tequila Patrón has pledged to match that donation, raising the starting contribution to $10 per mile completed.

Thus, every mile the team completes sends another mosquito net to a family in Africa, protecting them from the bite of a malaria mosquito.

Races fans will be able to join the race to save lives by visiting www.milestoendmalaria.org and donating as little as a penny per mile to the cause.

"We have a big year ahead of us graduating to the LMP1 division with Acura. Every mile we complete will be very important in achieving our goal of challenging for the championship, but now every mile will be even more vital,” said team owner, Duncan Dayton.

"The more we learned about malaria and the damage it caused on a global scale, the more we wanted to help – especially considering that a simple $10 mosquito can make a huge difference. Another child dies in Africa every 30 seconds from malaria. So during the Twelve Hours of Sebring – that's nearly 1,500 children.  It really is staggering, especially considering the disease is preventable. "We hope by launching Miles to End Malaria and displaying the Malaria No More logo on our Acura ARX-02a racecar, we can not only raise important funds for this cause, but also educate fans about the disease.”

The Patrón Highcroft Acura failed to finish at the Mobil 1 Twelve Hours of Sebring but completed 1117 miles. The team came through with a victory at the Sports Car Challenge of St. Petersburg, for a season total of 1384 miles—1384 mosquito nets for 1384 families.