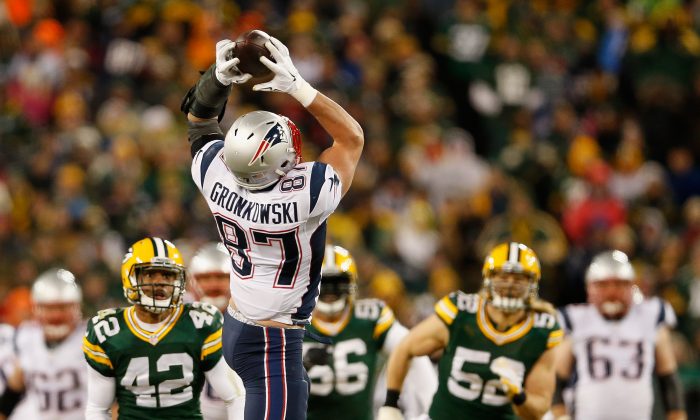 New England Patriots superstar tight end Rob Gronkowski was suspended by the NFL for a late hit during Sunday’s game against the Buffalo Bills.

Gronkowski hit Bills cornerback Tre’Davious White late. He was penalized for the play by the referees but wasn’t ejected from the game.

When White was on the ground after the play, Gronkowski jumped on him and hit him with his elbow in his head and neck area.

The NFL, however, decided to suspend him for one game without pay.

“Your actions were not incidental, could have been avoided and placed the opposing player at risk of serious injury. The Competition Committee has clearly expressed its goal of ‘eliminating flagrant hits that have no place in our game.’ Those hits include the play you were involved in yesterday,” vice president of football operations Jon Runyan said in a letter to Gronkowski of the suspension, according to ESPN.

Gronkowski, who hasn’t been suspended since he entered the league in 2010, apologized to White for the move.

“I’m not in the business of that,” Gronkowski said after the game, reported USA Today. “There was a lot of frustration, and I was just really frustrated at that moment. It just happened naturally through emotions, frustration. Just want to apologize to Tre’Davious White. I don’t really believe in the type of shots like that.”

He said there was frustration because he thinks White should have been called for a holding penalty.

“I just don’t understand why there wasn’t a flag,” he said. “And there was a couple of times in the game. And they are calling me for the craziest stuff ever. It’s like crazy. Like, what am I supposed to do? And then they don’t call that? It was just frustration. That’s what happened.”

“There’s nowhere in our game for that,” he said, Fox News reported.

G'morning, y'all. Here's my story from yesterday on Gronk's dirty hit and the angry Bills locker room afterward: pic.twitter.com/oTHFIo0Iel

Rob Gronkowski in the tunnel after a game where he gave Bills rookie CB Tre' White a concussion. @News_8 pic.twitter.com/wsEKdaZdZn

Patriots coach Bill Belichick said that he didn’t see what exactly transpired on the field.

“Yeah, I didn’t really see what happened on the whole play,” Belichick said, the Daily Mail reported. “There was quite a bit of stuff going on in that play. It was something that the officials handled today and it’s not really anything we have any control over.”

Bill Belichick apologizes to Sean McDermott for the Gronk hit that gave Tre' White a concussion. Called it bull%^&*. pic.twitter.com/qfkBB9bgid