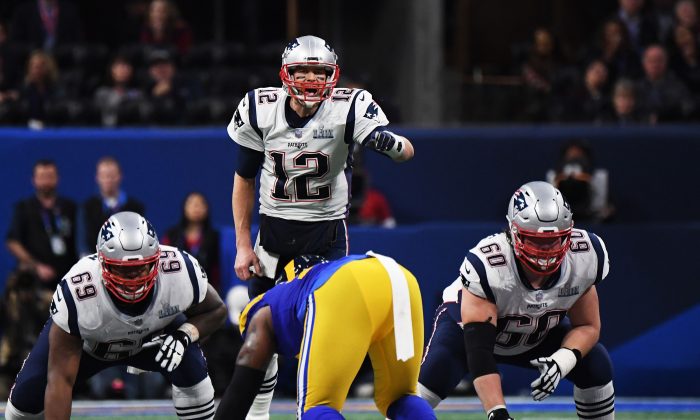 One of the more curious play calls during Super Bowl 53 was one involving a former Republican president.

New England Patriots quarterback Tom Brady was heard on the CBS broadcast shouting “Reagan! Reagan!” to his teammates as an audible (when the quarterback changes the play at the line of scrimmage). He was possibly referring to former President Ronald Reagan.

Then, he handed the ball off to running back Sony Michel in the third quarter, who ran for about four yards.

Well you know this was my favorite #Superbowl moment with a @ronaldreagan40 shoutout!

“Of course Reagan means run to the RIGHT”

“And obviously, Reagan means run to the right,” Romo said after the play completed.

The call prompted a number of political jokes on Twitter, while some claimed that Brady was trying to “troll” the left by invoking the name of the former Republican president.

Tom Brady trolls the left with his audible play “Reagan” which apparently means run to the right. https://t.co/MgIGCcevBV

Ultimately, the game was a low-scoring affair, with the Patriots defeating the Los Angeles Rams 13-3.

Meanwhile, Patriots coach Bill Belichick won a total of eight Super Bowls, including six as a head coach for New England and two as an assistant coach for the New York Giants.

I love it. Tom Brady shouted Reagan Reagan and then they ran to the right. I officially love Tom Brady and the Patriots are officially the team of the Republican Party. @GOP.

Brady, for his part, said he would not retire following the conclusion of the Super Bowl—win or lose.

The 41-year-old has been asked a number of times about leaving the game for good amid questions about his play and age.

Tom Brady calls for the “Reagan” play. Presumably because the play will trickle down the field.

When asked during an interview with ESPN last week if the game would be his last, Brady said, “Zero.”

He curled his fingers and thumb to make a “0” shape to emphasize his point.

“I feel like I’m asked that a lot and I feel like I repeat the same answer, but no one wants to believe me,” he said.

Previously, Brady said he wants to play until he’s 45.

Brady, who is slated to turn 41 in August, added: “I know how hard it was this year, you know, and the commitment it takes and hopefully I’ve learned from some of the things that happened this year to be better next year. But every year’s tough.”

“I’m gonna know when the time’s right and I’m gonna feel like, ‘OK, I’ve kind of had enough,’” he told ESPN.

“I don’t quite feel like that yet. I feel like I’ve still made a lot of improvements and I still feel like I can continue to do it at a championship level. I think that’s where I was at before and that’s still where I’m at now,” the quarterback said.