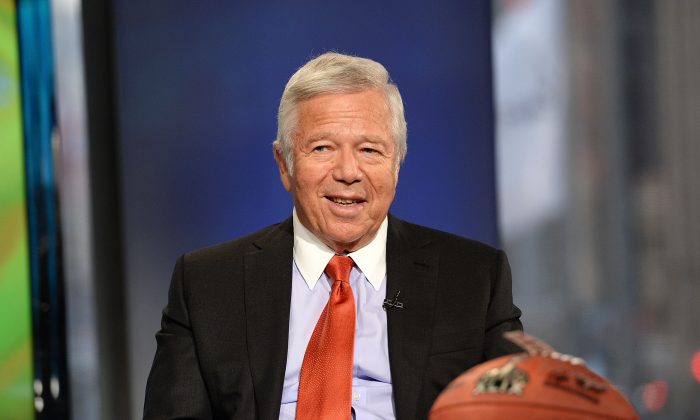 The owner of the New England Patriots—who are slated to play Super Bowl 51 against the Atlanta Falcons—explained why he’s loyal to President Donald Trump, amid rampant criticism of the new president published in legacy media outlets.

In an interview with the New York Daily News, Robert Kraft explained that Trump lent him his support during a hard period in his life after his longtime wife, Myra, died in 2011.

“When Myra died, Melania and Donald came up to the funeral in our synagogue, then they came for Memorial week to visit with me,” Kraft said. “Then he called me once a week for the whole year, the most depressing year of my life when I was down and out. He called me every week to see how I was doing, invited me to things, tried to lift my spirits. He was one of five or six people that were like that. I remember that.”

Following Trump’s win, Kraft, who also donated a significant amount of money to President Barack Obama’s two campaigns, visited the Trump Tower in New York City, attending a dinner on the eve before his inauguration.

Kraft suggested that he’s a fan of some of Trump’s policies and proposals.

“To be honest, I think we have a real challenge, especially in the inner cities,” Kraft said. “Working class people and lower income people, we have to help more. They’ve gotten hurt over the last decade a lot. We have to create jobs and a vibrant economy that helps those communities throughout America. I really believe and hope that the new administration is going to do that.”

Slovenia’s Tourism Booms Thanks in Part to Melania Trump

“I’ve received a number of inquiries relative to a note that I wrote to Donald on Monday,” Belichick said of the letter. “Our friendship goes back many years and I think anybody that’s spent more than five minutes with me knows I’m not a political person. The comments are not politically motivated, I have a friendship and loyalty to Donald.”

“[A] couple of weeks ago, we had Secretary of State [John] Kerry in our locker room. That’s another friend of mine. I can’t imagine two people with more different political views than those two, but to me friendship and loyalty is just about that. It’s not about political or religious views.”