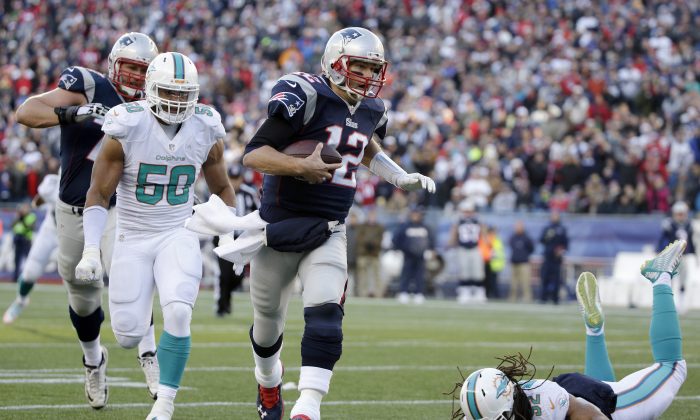 The New England Patriots won the AFC East and play the New York Jets at home next Sunday. Here’s some of the latest updates:

Tom Brady gave a hint about his life post-football.

He said on WEEI that he wants to educate others about injury prevention and nutrition.

“It’s been quite a learning experience for me over 15 years of playing pro football, and I think there’s been a lot of things that I’ve learned that I would really love to teach other people,” he told WEEI, per the Boston Globe.

He talked about his regimen, which includes going to bed at 9 p.m. and doing cognitive exercises.

He added: “I see a lot of injuries around the league and I just shake my head, like man, that’s so easily preventable.”

Belichick said bad coaching at end of first half

Coach Bill Belichick said there was bad coaching at the end of the first half.

“Well, I’d say you can just put the whole sequence on me — bad coaching, poor end of the half,” Belichick told ESPN.

“Nothing that we did was the way that we wanted it to go. So that is my fault. Bad coaching, I’ll take responsibility for it and try to see to it that it doesn’t happen again. It was a poor coaching sequence of plays, period.”

At the end of the half, the Dolphins had a nice punt return and then scored a quick touchdown after that.

“Obviously we had a lot better opportunities. We did a lot of things better in the second half than we did in the first half — run blocking, pass blocking, running, passing, all of the above were better. But, he did a good job with his opportunities. I have confidence in all of our backs. They’ve all been productive for us.”

Superior Court Judge Susan Garsh’s order, released Monday, says people will not be allowed inside the Fall River Justice Center if they’re wearing or carrying clothing, buttons or other objects that include the name or images of the NFL, Patriots or “football-related insignia.”

Hernandez has pleaded not guilty to murder in the June 2013 killing of Odin Lloyd, who was dating the sister of Hernandez’s fiancee. Jury selection in the trial starts Jan. 9.

The judge also said 20 seats will be set aside for each day of trial for members of the public to attend.