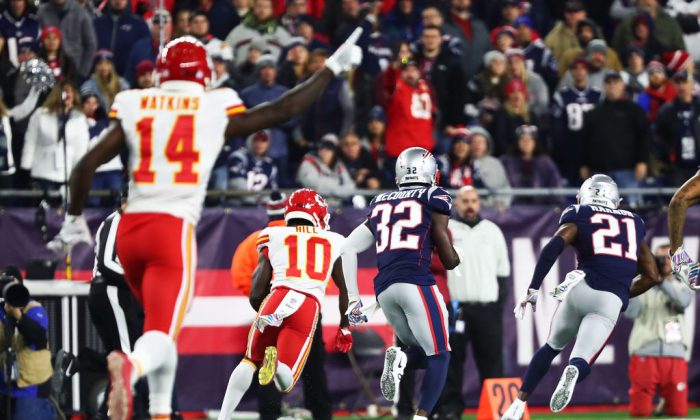 Tyreek Hill #10 of the Kansas City Chiefs scores a touchdown in the fourth quarter of a game against the New England Patriots at Gillette Stadium in Foxborough, Massachusetts, on Oct. 14, 2018. (Adam Glanzman/Getty Images)
NFL

The New England Patriots fan who infamously threw beer on Kansas City Chiefs wide receiver Tyreek Hill after he scored a touchdown is being charged.

The unusual situation came on Oct. 14, at Gillette Stadium after Hill caught a 75-yard touchdown pass and his momentum carried him to the back of the end zone, close to where fans sit above the field.

When he arrived in that area, Hill was taunted by some fans while one, who has still not been publicly identified, poured beer on him.

The Foxborough Police Department said in a statement on Oct. 15, that the man who threw the beer at Hill was identified using surveillance video as a 21-year-old resident of Mansfield, Massachusetts.

The man is facing charges of disorderly conduct and throwing an object at a sporting event, the department said.

The New England Patriots said in a statement also issued Monday, that the fan is banned from the stadium.

“Gillette Stadium security has identified the fan who violated the fan code of conduct by tossing beer onto a player during the game last night. The matter has been turned over to local law enforcement and the fan will be sent a letter of disinvite to all future events at Gillette Stadium,” the team said.

Tyreek Hill and Drew Rosenhaus want to take action against fan that doused the Chiefs WR with beer Sunday. They are talking to the NFL/NFLPA about options. “That type of behavior is unacceptable,” Rosenhaus said. “Players have to be protected. We want that fan to be prosecuted.”

Hill initially said he didn’t get riled up by the thrown beer.

“My coach [Andy Reid] told me, ‘Don’t get emotional. Don’t get mad about it because it comes with the territory,'” Hill told Boston.com. “I’m not mad at all.”

But his agent said later that Hill wants the fan prosecuted.

“That type of behavior is unacceptable,” Hill’s agent, Drew Rosenhaus, said in a statement to ESPN. “Players have to be protected. We want that fan to be prosecuted.”

Now if he smacked the piss out of one of you clowns you would be all over social media crying ready to sue him! Fans need to chill before somebody get hurt! You don’t have to like the opposing team but you need to show respect or don’t go! https://t.co/cdNy09AV4o

A number of fans and former players took issue with the reaction Hill got from the fans when he hit the barrier separating them from the field, including Reggie Bush, a former NFL running back.

“Now if he smacked the piss out of one of you clowns, you would be all over social media crying ready to sue him!” he said via Twitter. “Fans need to chill before somebody [gets] hurt! You don’t have to like the opposing team, but you need to show respect or don’t go!”