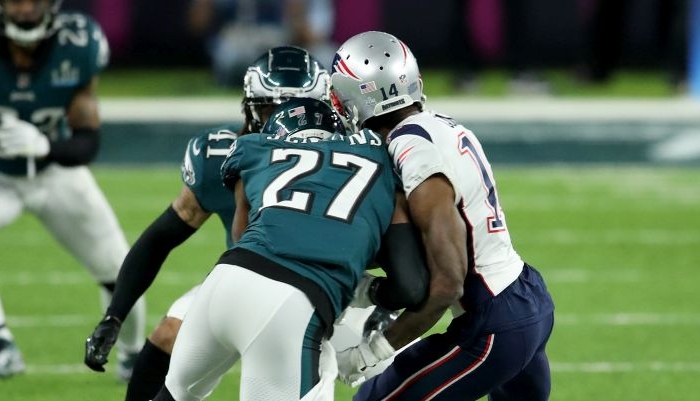 Patriots’ Brandin Cooks Rushed Off Field After Nasty Hit, Out For the Game

Brandin Cooks, the New England Patriots wide receiver, was rushed off the field during Super Bowl 52.

He caught a pass from Tom Brady before he received a blindside hit from Philadelphia Eagles safety Malcolm Jenkins.

It appeared to be a helmet-to-helmet hit.

According to Patriots beat writer for the Providence Journal, Mark Daniels, Cooks was “rushed straight to the locker room.”

Cooks won’t return to the game, according to the Patriots in a tweet.

#Patriots injury update: Brandin Cooks (head) has been ruled out for the game.

This is a breaking news update; refresh for later updates.

Brandin Cooks will not return. He is out. Bad news.

Brandin Cooks was taken back to the locker room after a brutal and scary-looking hit to his head https://t.co/yum5WSYBQE pic.twitter.com/OiHP6fWEPr

For those of you wondering, they did not show the replay of the hit on Cooks in the stadium. Not once. I still haven't seen it.