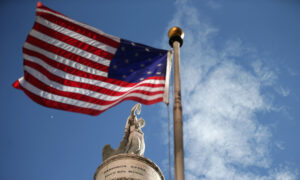 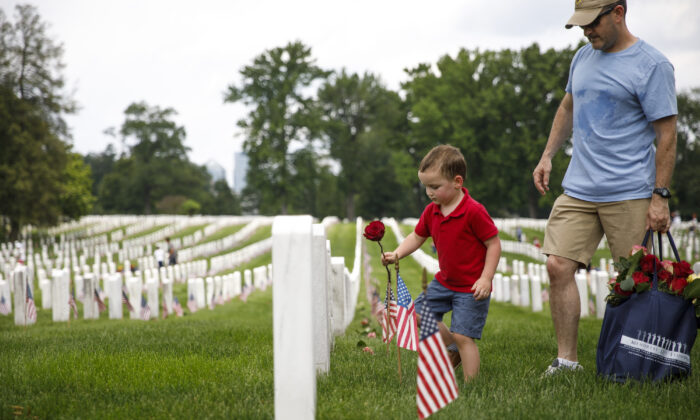 Matthew Murphy, 4, places a rose on a tombstone beside his father, Kevin Murphy, of Springfield, Va., during a volunteer event at Arlington National Cemetery ahead of Memorial Day on May 26, 2019, in Arlington, Va. (Tom Brenner/Getty Images)
Viewpoints

In order to thrive, or even survive, a country and culture call on the sacrifice of each generation, in the bearing, raising, and educating of its young and inspiring them to do the same in their turn.

The required sacrifice in each generation also involves the patriotic duty—instilled in young men from an early age in most countries and cultures—to put one’s own life on the line if called to do so. Many English schoolboys of my generation, like those before it, had learned from the Latin poet Horace, “Dulce et decorum est pro patria mori”—“It is sweet and fitting to die for one’s homeland.” In the United States, we honor each year on Memorial Day the profound sacrifice of those who died for this country.

In his recent book, “Things Worth Dying For: Thoughts on a Life Worth Living,” Charles Chaput, recently retired archbishop of Philadelphia, observes that “cultures unable to inspire the ultimate sacrifice from their people for a commonly shared need or code have no future. They’re already dead without knowing it.”

But no country or cause takes for granted such a willingness to sacrifice. In recent years, many students have been learning to be skeptical, if not cynical, about calls to patriotism. But even in February 1933, the month after Hitler was appointed chancellor of Germany, students at a debate at Oxford University in England voted for a motion affirming that “this House would not in any circumstances fight for King and Country.” The motion shocked people throughout the English-speaking world and delighted those Germans seeking to establish a new empire, a “Third Reich,” of the decadence and passivity of Britain’s young elites.

As Chaput says, we don’t live in a warrior culture in which the patriotic virtues are instilled and universally shared as they were in Sparta, Athens, or Europe’s Middle Ages.

It’s symptomatic, even if an oversight, that U.S. Vice President Kamala Harris tweeted a greeting that wished us all a happy long weekend, with no mention of Memorial Day as a time of mourning for those who had sacrificed their lives for the country. (The next day, after much criticism, and in the following days, she acknowledged the purpose and meaning being commemorated.)

Patriotism is the love or loyalty of an individual for his or her country. Israeli scholar Yoram Hazony distinguished it from nationalism, which he defines as a theory that seeks to establish a world of free and independent nations. Neither patriotism nor nationalism, so understood, requires the subjection of other nations or their subordination to a shared, universal law.

Love of one’s own country doesn’t entail a desire to dominate others or to impose a global, transnational, rule of law—uniform and universal—in the manner of imperialist projects such as the European Union or communist China.

One effect of the two world wars of the last century was a distrust of nationalism and patriotism. Hazony argues, as, from a different perspective, had Lenin with respect to World War I, that those wars were forms of inter-imperialist rivalry or struggle for empire, rather than for the freedom and independence of nations within a system of free and independent national states. The development of international and transnational bodies such as the United Nations after the war sought to achieve harmony and peace by way of establishing a rule of international law that constrained national loyalties.

A kind of global utopianism, beyond that of world communism in its Stalinist and Maoist forms, developed in the West. It sought to prevent the reemergence of nationalist excesses, especially of Germany, by establishing international and transnational bodies that could impose their will on nations in the name of peace and the rule of law.

More ambitiously, the European Union was designed from the start to limit democratic and patriotic impulses and to impose administrative state and trans-state bureaucracies. The EU was a movement, not just toward an integrated trading zone, as first sold to politicians and voters, but also toward a superstate, run by a democratically unaccountable bureaucracy that could limit and constrain the parliaments and courts of member states, imposing a common law on all. The EU has developed the trappings of a sovereign state—its own flag, anthem, currency (the euro adopted by most members), and aspirations to a common foreign policy and military forces.

As states have become more bureaucratic and national sovereignty limited by global political and economic developments, they have become less apt to win the loyalty of citizens as embodiments of the community. For many, as philosopher Alasdair MacIntyre puts it, the modern nation-state has devolved into a “bureaucratic supplier of goods and services” that never gives value for money or lives up to its promises. It doesn’t and can’t embody community or be the repository of sacred values. Yet, from time to time it “invites one to lay down one’s life on its behalf.” The result, he wrote, “is like being asked to die for the telephone company.”

And yet, modern national states like the United States aren’t at all like a telephone company. There’s certainly a substantial minority (perhaps 25 percent)—members of which have dominated economics and politics for decades—that’s both globalist and individualist, favors a borderless world with uncontrolled immigration, and whose view of nation, as of family and local and regional community, is at odds with the values and views of most of the population.

Those who hold such elite views, globalist and individualist at the same time, are wary of or hostile to democracy. They fear the masses and favor the rule of experts, the growth of the regulatory, administrative state, of technocracy, and of transnational institutions and organizations that don’t answer to the voters of a democratic polity.

The result has been a “democratic deficit” and loss of national sovereignty. Elites within and across nations responded with shock and horror to Trump’s 2016 victory and to the Brexit vote of the same year. In both cases, the outcome was a rejection of the assumptions, worldviews, and advice of the ruling class. But supporters of the losing side saw in the result, not a vindication but a crisis of democracy. It was a warning of what happens when ordinary people have too much power and experts too little.

Patriotism—loving one’s country and honoring those who sacrifice their lives for it—and democracy are linked in this context. Allowing citizens to vote is risky for elites when the country is divided and most don’t share their values or views and may not follow their advice. It carries the risk that those with the “wrong” views—those with a strong sense of place and a rootedness in their own country and community, of commitment to family, faith, and flag—may stop or at least hinder the dissolution of such traditions and sentiments devoutly wished for by the better credentialed and more affluent elites.

The problem for our globalist and individualist elites is that they depend on the patriotism and sacrifice of ordinary people while at the same time scorning them and their views.