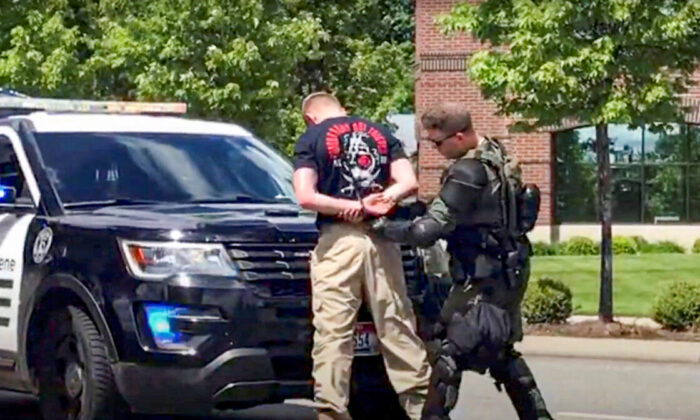 This still image obtained from a social media video shows a man affiliated with the Patriot Front group being detained by a police officer in riot gear on June 11, 2022. (North Country Off Grid/Youtube/via Reuters)
Crime and Incidents

Authorities arrested 31 members of the alleged ethnonationalist group Patriot Front in Idaho near a pride event on June 11 based on suspicion that the group aimed to carry out riots.

The all-male group, wearing matching gear, was standing inside a truck when the Coeur d’Alene police stopped the vehicle and arrested them. In a video circulating on the internet, police can be seen lifting up the roller door of a U-Haul truck, revealing the men with their hands already raised in surrender. The individuals came to “riot downtown,” Coeur d’Alene Police Chief Lee White said during a news conference, according to The Associated Press.

Of the 31, only one was from Idaho. The rest came from Arkansas, Washington, South Dakota, Illinois, Virginia, Oregon, Wyoming, Texas, Utah, Alabama, Iowa, Colorado, and Missouri.

Thomas Rousseau, the leader of the group, was among the arrested. The U-Haul truck was positioned close to the LGBTQ “Pride in the Park” event that was being held by the North Idaho Pride Alliance at the Coeur d’Alene City Park.

Inside the truck, police found shields, shin guards, a smoke grenade, and riot gear. The men were all wearing khaki pants with logos on their hats and arm patches identifying them as members of the group.

When asked by reporters at the scene how they knew to inspect the U-haul truck, White told them, “We have informants.”

White told AP that police came to know about the U-Haul truck after a tipster told them that “it looked like a little army was loading up into the vehicle” in the parking lot of a hotel.

Authorities also discovered paperwork among the group similar to military or police operations plans. Based on collected evidence and documents, authorities determined that the group planned to riot at the park and in multiple downtown areas.

All 31 members were charged with misdemeanor and conspiracy to riot. They underwent the booking process on Saturday and are scheduled to be arraigned on Monday. According to White, the members could face more charges once prosecutors review the evidence.

“In my opinion, I would gladly arrest 31 individuals who are coming to riot in our city for a misdemeanor rather than have them participate in some sort of seriously disruptive event, which is exactly what they were planning in the downtown area,” White said, according to The Spokesman-Review.

Authorities said they were aware of online threats leading up to the event during the weekend. As a result, the police department had stepped up its presence in the region.

Local motorcycle club Panhandle Patriots had also planned on holding protests at the event, with a video claiming that they intend to go “head to head with these people.” However, President Michael Birdsong insisted that the statement in the video was taken out of context, according to KHQ.

“We have zero problems against anybody who is gay, or whatever they choose to call themselves, whatever gender,” Birdsong said. “I mean, it’s not our lifestyle, but we are not people to judge.”

He emphasized that the protests were targeted against “grooming books” he said are “geared toward pedophilia,” likely referencing recent news of teachers across the country pushing books promoting transgenderism and related content to children in schools.