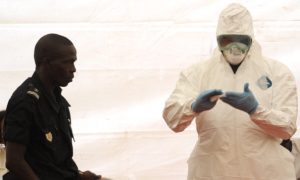 Patrick Sawyer: American Who Died of Ebola Was Planning to Travel to Minnesota (+Pictures)

Patrick Sawyer has been identified as the American who was killed by the Ebola virus.

Sawyer was apparently a government official in Liberia who had family in Minneapolis in that he was planning on visiting soon. His wife and three daughters reside there.

Sawyer traveled to Nigeria for a conference where he collapsed and was put in quarantine before dying.

Fears about the spread of Ebola have ramped up because Sawyer also had a stopover in Ghana and changed planes in Togo.

Authorities aren’t sure where and when he contracted the disease.

“I have three daughters who will never get to know their father,” Decontee told the Pioneer Press.

“Patrick was coming here. What if he still wasn’t displaying symptoms yet and came?” Sawyer asked. “He could have brought Ebola here. Someone else could bring Ebola here.”

Patrick had been caring for a sister who was sick with what turned out to be Ebola before he became ill, Decontee said.

Decontee Sawyer, wife of Liberian government official Patrick Sawyer, a naturalized American who died from Ebola after traveling from Liberia to Nigeria, talks with a reporter at her home in Coon Rapids, Minn., Tuesday, July 29, 2014. An outbreak of Ebola in West Africa may seem like a distant threat to many Americans, but it is stirring fear in Minnesota, home to thousands of Liberian immigrants. (AP Photo/Craig Lassig)

This photo provided by the CDC shows an ebola Virus. U.S. health officials are monitoring the Ebola outbreak in Africa but say the risk of the deadly germ spreading to the United States is remote. (AP Photo/CDC)

In this photo taken on Monday, July 28, 2014, people hang out in a street under a banner which warns people to be cautious about Ebola, in Monrovia, Liberia. Two American aid workers in Liberia have tested positive for the virus and are being treated there. U.S. health officials said Monday that the risk of the deadly germ spreading to the United States is remote. (AP Photo/Jonathan Paye-Layleh)

Sawyer’s death on Friday has led to tighter screening of airline passengers in West Africa, where an unprecedented outbreak that emerged in March has killed more than 670 people in Guinea, Sierra Leone and Liberia. But some health authorities expressed little confidence in such precautions.

“The best thing would be if people did not travel when they were sick, but the problem is people won’t say when they’re sick. They will lie in order to travel, so it is doubtful travel recommendations would have a big impact,” said Dr. David Heymann, professor of infectious diseases at the London School of Hygiene and Tropical Medicine.

“The important thing is for countries to be prepared when they get patients infected with Ebola, that they are isolated, family members are told what to do and health workers take the right steps.”

The World Health Organization is awaiting laboratory confirmation after Nigerian health authorities said Sawyer tested positive for Ebola, WHO spokesman Gregory Hartl said. The WHO has not recommended any travel restrictions since the outbreak came to light.

“We would have to consider any travel recommendations very carefully, but the best way to stop this outbreak is to put the necessary measures in place at the source of infection,” Hartl said. Closing borders “might help, but it won’t be exhaustive or foolproof.”

The risk of travelers contracting Ebola is considered low because it requires direct contact with bodily fluids or secretions such as urine, blood, sweat or saliva, experts say. Ebola can’t be spread like flu through casual contact or breathing in the same air.

Patients are contagious only once the disease has progressed to the point they show symptoms, according to the WHO. And the most vulnerable are health care workers and relatives who come in much closer contact with the sick.

He died on Friday in the city, which is home to 21 million people, reported Reuters.

A man reads a local newspaper on a street with the headline Ebola Virus kills Liberian in Lagos, in Lagos Nigeria, Saturday, July 26, 2014. (AP Photo/Sunday Alamba)

In this photo taken on Sunday, July 27, 2014, Medical personnel inside a clinic taking care of Ebola patients in the Kenema District on the outskirts of Kenema, Sierra Leone. Liberia President Ellen Johnson Sirleaf has closed some border crossings and ordered strict quarantines of communities affected by the Ebola outbreak. The announcement late Sunday came a day after Sirleaf formed a new taskforce charged with containing the disease, which has killed 129 people in the country and more than 670 across the region. (AP Photo/ Youssouf Bah)

“The private hospital was demobilized (evacuated) and the primary source of infection eliminated. The decontamination process in all the affected areas has commenced,” Lagos state health commissioner Jide Idris told a news conference.

Some staff members were isolated because they had contact with Sawyer.

The current iteration of the Ebola virus has killed over 650 people across at least three countries since starting to be diagnosed in February.

The current fatality rate is 60 percent.

Correction: A previous version of this article had a headline that misstated the situation. Epoch Times regrets the error.