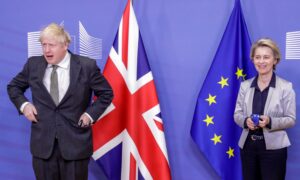 Patrick Byrne: ‘This Is a Slow Coup Coming at Us From China’

WASHINGTON—Well before election day, entrepreneur Patrick Byrne had assembled a cyber intelligence team to monitor voting activity, and he has since reported instances of irregularities and hacking of U.S. voting machines.

“This is in fact a slow coup,” Byrne said, involving foreign forces that he suspects includes the influences of the Chinese Communist Party (CCP) in particular. Byrne is familiar with CCP tactics, and cited some of their strategies.

On Saturday, Byrne introduced Lt. General Michael Flynn who spoke at a rally where thousands had gathered in Washington on Dec. 12, petitioning the government for fair elections and transparent counting. Similar grassroots protests have taken place every Saturday since the general election in capitals across the 50 states.

Byrne said that instances of election fraud were obvious but, largely because of the media, many people are hearing a distorted story, although less are continuing to believe it.

“They are gaslighting the American public,” he said. “They all know. It’s ridiculous. If we bend the knee to this, there’ll never be a free election in America.”

“The mainstream media has had this snooty attitude for years,” he said. “Well, they have disgraced themselves by how they’ve handled what they’ve revealed themselves to be over recent years, but in particular in regard to this national emergency.”

He said the mainstream media have “so humiliated themselves” there is no coming back. It’s why millions of Americans have turned to other news sources.

“They’re going to lose, and everything is going to be revealed,” he said.