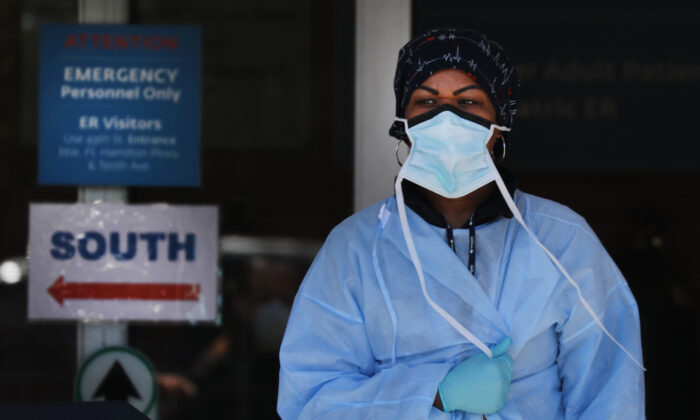 Patients who become infected with the CCP virus can spread the illness before showing any signs of having it, researchers from the Centers for Disease Control and Prevention (CDC) found.

Researchers looked at 243 cases in Singapore from January through March and identified seven clusters of cases where the “most likely explanation” for the secondary cases becoming infected was “presymptomatic transmission.”

In a report published this week, the CDC defined presymptomatic transmission as “the transmission of SARS-CoV-2 from an infected person (source patient) to a secondary patient before the source patient developed symptoms.”

The transmission type is identified by looking at the dates when the exposure occurred as well as when symptoms begin to develop. Researchers have to try to rule out exposure to anyone else with COVID-19.

SARS-CoV-2 is the technical name for the CCP (Chinese Communist Party) virus, commonly known as the novel coronavirus. The virus causes a disease called COVID-19 that can cause serious illness or death. Symptoms include fatigue, fever, shortness of breath, and diarrhea.

Transmission from patients without symptoms was known as early as February but a growing body of evidence has prompted further lockdowns across the United States and calls for a nationwide recommendation for people to wear masks every time they leave home.

“We need to assume that even if we are feeling fine, we can be infected and can infect others,” Los Angeles County Health Director Barbara Ferrer said at a briefing on Wednesday, prompting Los Angeles Mayor Eric Garcetti to tell everyone to don masks when going out for groceries or medicine.

Georgia Gov. Brian Kemp told reporters the same day that the reason he announced a stay at home order was because of recent findings involving transmission from asymptomatic patients.

“Those individuals could’ve been infecting people before they ever felt bad,” he said. “But we didn’t know that until the last 24 hours. And as Dr. [Kathleen] Toomey told me, this is a game-changer for us.”

The CDC added a line on its website this week stating: “Some recent studies have suggested that COVID-19 may be spread by people who are not showing symptoms.”

As many as one in four patients will never show symptoms and patients who aren’t showing symptoms can spread the virus up to 48 hours before beginning to show signs of the illness, CDC Director Dr. Robert Redfield said this week. The recent finding prompted federal officials to reconsider guidance that tells people not to wear masks unless they’re sick or a healthcare worker.

The CDC’s study of patients in Singapore found 10 cases where presymptomatic transmission likely happened, or 6.4 percent of the 157 cases where the virus was locally acquired. The transmission occurred one to three days before symptoms began developing.

The research underscores “the critical role” of social distancing measures—including having people avoid gathering in crowds—in blunting the spread of the CCP virus, according to the report.

“To account for the possibility of presymptomatic transmission, officials developing contact tracing protocols should strongly consider including a period before symptom onset,” they wrote.

The existence of such transmission undercuts the strategy of detecting cases early and tracing everyone who came into contact with newly discovered patients.