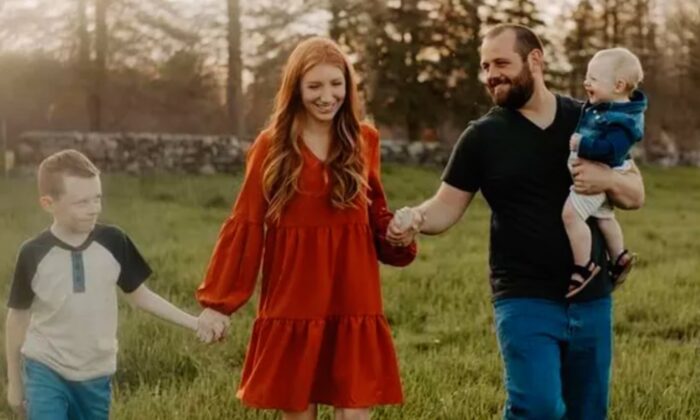 D.J. Ferguson (right) is seen in this picture together with his family. (Courtesy of GoFundMe)
US News

A Massachusetts father of two who was removed from a heart transplant waiting list because he refused to get a COVID-19 vaccine has undergone open-heart surgery, his family said last week.

David Ferguson, the father of the 31-year-old patient D.J. Ferguson, told Fox News the surgery was a last resort option as doctors tried to find temporary solutions to stabilize him after staff at the Boston hospital said he was ineligible for the transplant due to being unvaccinated.

“He got led down a path where they had to stop doing procedures, where they said he was qualified nonetheless for the heart transplant. But he had to get the vaccine in order to get that transplant,” the patient’s father told the network.

“He’s deteriorated so much so quickly that they had to resort to open-heart surgery and doing the LVAD [left ventricular assist device] mechanical pump,” he said. “So now my boy has a pump, he’s in recovery. He went through seven hours of surgery.”

Ferguson was admitted to the hospital in November after suffering from a hereditary heart condition and his heart and lungs were filled with blood and fluid.

The hospital—Brigham & Women’s Hospital—said that the COVID-19 vaccines are required, defending itself by saying transplant programs have certain requirements that patients need to follow.

“Our Mass General Brigham healthcare system requires several CDC-recommended vaccines, including the COVID-19 vaccine,” the hospital said in a statement sent to The Epoch Times.

Ferguson’s mother, Tracey, said her son has nothing against COVID-19 vaccines, noting that he’s had other immunizations in the past. In an appeal for funds, the patient’s family said Ferguson has had a short history of atrial fibrillation, often called AFib—an irregular and often rapid heart rhythm—which could put him at high risk for adverse reaction and even death after taking the shot.

“He wants to be assured by his doctors that his condition would not be worse or fatal with this COVID-19 vaccine,” his mother said.

A relative of Ferguson wrote on the patient’s GoFundMe fundraising page, which has garnered nearly $90,000, that they have had many conversations with doctors who also confirmed that there is a chance his heart may swell and go into a severe crisis. However, getting the COVID-19 vaccine is a choice that the Ferguson family will have to make if he wants to be listed for a transplant.

“We’re being pressured to choose a shot that could kill him. This is not just a political issue. People need to have a choice!” his family said.

“Denying a patient an organ transplantation on the basis of an investigational, ineffective, and categorically unsafe vaccine is itself unethical, immoral. And from a clinical and civil perspective, it’s illegal,” McCullough told NTD News, a sister media of The Epoch Times.

The hospital previously said research has shown that transplant recipients are at higher risk than non-transplant patients of dying from COVID-19, and that its policies are in line with the recommendations of the American Society of Transplantation and other health organizations.

“There are currently more than 100,000 candidates on waitlists for organ transplantation and a shortage of available organs—around half of people on waiting lists will not receive an organ within five years,” the hospital said.

Dr. Arthur Caplan, the head of Medical Ethics at NYU Grossman School of Medicine, told CBS Boston that “organs are scarce” and being vaccinated is necessary for this type of procedure.

“We are not going to distribute them to someone who has a poor chance of living when others who are vaccinated have a better chance post-surgery of surviving,” Caplan told the network.