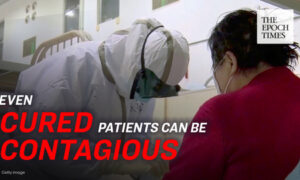 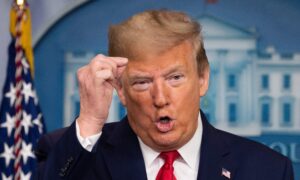 Patient Dies After Being Tied Down For Three Days

Yang Qing (alias) is a Wuhan resident whose husband went to the hospital on Jan. 10 for diabetes, and died on Jan. 25. He was tied to a bed with a hospital note stating “in a coma.” According to Yang Qing, he was crying and in pain for three days until the day he died. He was over 40 years of age.
–
Reporter: What was the cause of the death? Wasn’t it confirmed with the test?
Yang Qing: It was said to be severe pneumonia. There was no confirmation of the coronavirus infection.

Reporter: Which hospital did your husband go to?
Yang Qing: Wuhan Central Hospital.
Reporter: Can you describe what was going on in the hospital and the treatment involved?

Yang Qing: After about 7 days in the hospital, he was admitted to the ICU because the doctor said his diabetes was quite complicated. He didn’t have a fever. Around Jan. 19, the hospital notified us that the ICU would be shut down, no one explained why.

Yang Qing: He started having a fever on Jan. 20, but he was still consuming some liquid food.

On the 23rd, they told me his blood pressure was too low and asked me to sign a bunch of papers. I had no clue what I was signing, it seemed like a bunch of consent letters for critical condition, rescue procedure, and so on. I thought as long as he’s saved, I just signed them all. I kept on asking them to transfer him to the ICU. But they said the ICU won’t take him.

I was really sad. At the beginning, I requested dialysis, but they said he was only having mild pneumonia. Ten days later, they told me with or without dialysis he’s going to die. I had signed everything they wanted me to, but he’s only getting worse every day. He kept groaning in pain for days. They had me buy dementia gloves to keep his hands and feet restrained in bed.

Reporter: Why would they keep him restrained?

Yang Qing: He said he was feeling very ill. They did not do anything except just keep him tied up to the bed. He was groaning the entire time. The hospital said he was dying. The nurse even wrote that he’s in a coma. But he was crying out the whole time, day and night. From the 23rd to the 25th. Until he passed away, he was still tied up to a bed, both hands and feet.

Reporter: That’s really sad. How many days was he tied to the bed?
Yang Qing: Three days.

Reporter: Were the patients in the ward all infected with pneumonia?

Yang Qing: No, there were also cancer patients.

Reporter: What was in your mind seeing him tied to the bed?

Yang Qing: I was crying the entire time. There’s nothing I could do for him. The doctor told me I should be content because at least he was in the ward.

Yang Qing: After he died, the hospital asked me to pay in full otherwise there’s no death certificate. I wanted to keep the body in the cold chamber of the morgue. But they said the government demands immediate cremation regardless of the cause of death. They said it’s a crime if I didn’t cremate him right away. I was too frightened to judge so I agreed with the cremation.

Conclusion: The regime covered up the outbreak in Wuhan and would not recognize human transmission of the CCP virus until Jan. 20. During that time, many people visited hospitals for other illnesses and then died after contracting the virus.

The interview was conducted on April 13 by Hong Ning of the Chinese-language Epoch Times.