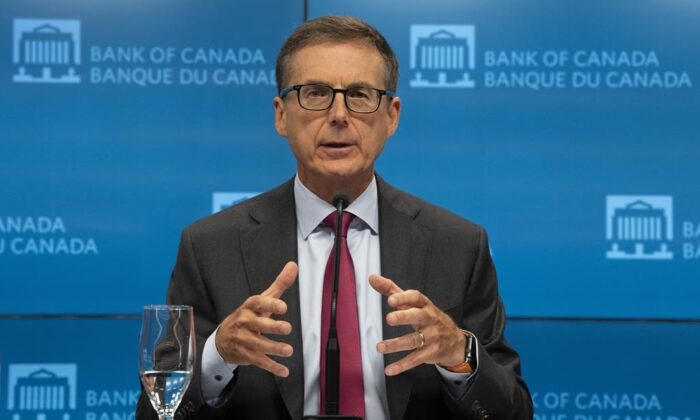 Bank of Canada Governor Tiff Macklem speaks during a news conference at the Bank of Canada, on Sept. 10, 2020 in Ottawa. (The Canadian Press/Adrian Wyld)
Economies

Path to Economic Recovery Filled With Risks That Need to Be Managed, Macklem Says

OTTAWA—The governor of the Bank of Canada says managing the risks from the pandemic is more critical than ever, saying it is key to a recovery and the stability of society.

Tiff Macklem says in a Thursday morning speech that a second historic recession in just over a decade underlines how managing financial system risks matters to the livelihoods of Canadians.

And he identifies a few of the risks the bank will be keeping an eye on, including how many companies and households can’t keep up with debt and mortgage payments.

Companies and households have been given a financial lifeline during the pandemic, including deferrals on mortgage payments, a drop in the central bank’s key policy rate, and billions in federal aid and credit programs.

Macklem says in the speech to the Global Risk Institute that policy-makers need to navigate the potholes on the road to recovery,  including new ones created by the pandemic.

Canada has managed the crisis better than many countries, he says. Macklem notes the country’s risk-cautious culture that is not usually celebrated, but it protected the economy during the financial crisis a decade ago and has helped during the current recession.

“The COVID-19 pandemic has made it painfully clear that how well we manage risks has a huge impact on our well-being,” Macklem says in the text of his speech, released ahead of time to journalists.

“Globally, I don’t think it’s an exaggeration to say that the quality of risk management will increasingly influence the success and stability of societies.”

The speech comes as the country heads into an expected second wave of COVID-19, with case counts rising and the threat of lockdowns looming over businesses and workers.

Widespread lockdowns in March and April led to historic plunges in the labour market, with three million people out of work and 2.5 million more working less than half their normal hours.

The country has recouped about two-thirds of the jobs lost, but Macklem says it will be a long time before the losses in jobs and work hours return to pre-pandemic levels.

Federal spending has skyrocketed to provide aid to hard-hit companies, and put a financial floor under Canadians whose incomes crashed. The bank’s key interest rate quickly dropped to 0.25 percent and will stay there until a recovery is well underway.

Macklem says the effect of the lower-interest rate environment created will require insurance companies and pension funds to adjust, and the path the policy rate takes will eventually have an impact on financial system vulnerabilities.

“Without the fiscal and monetary policy actions, the economic devastation of the pandemic could have been much, much worse,” Macklem says in the text of his speech.

“As much as a bold policy response was needed, it will inevitably make the economy and financial system more vulnerable to economic shocks down the road.”

But it’s not the only risk Macklem warns about, pointing to the long-term impacts climate change will have on the financial system and domestic economy.

Physical and financial risks from more frequent and severe weather events, including the damage to infrastructure and homes, will almost certainly grow, he says.

Business face risk from shifts in earnings and expenses as the country transitions to a low-carbon economy that need to be properly managed, Macklem says. Otherwise, he says, climate change could lead to heavy losses for financial institutions or threaten the stability of the country’s financial system.