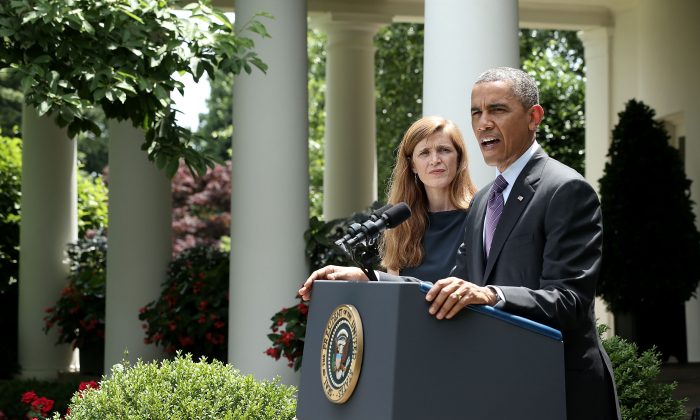 U.S. President Barack Obama (R) speaks as former aide Samantha Power listens during a personnel announcement at the Rose Garden of the White House June 5, 2013, in Washington, D.C. The Obama administration announced legislation and executive orders on June 5 targeting the growing industry of “patent trolls,” yet for the technology sector in New York City, this may still not be enough. (Photo by Alex Wong/Getty Images)
New York

NEW YORK—Companies that use patents as a form of extortion are harming businesses and stifling innovation. The Obama administration announced legislation and executive orders on June 5 targeting the growing industry of “patent trolls,” yet for the technology sector in New York City, this may still not be enough.

The patent system was meant to encourage innovation and invention. “It was designed to reward Americans for their hard work, risk-taking and genius,” states the White House blog, “But in recent years, there has been an explosion of abusive litigation designed not to reward innovation and enforce intellectual property, but to threaten companies in order to extract settlements based on questionable claims.”

Lawsuits from patent trolls constitute 62 percent of all patent lawsuits in the United States, and their victims paid $29 billion in 2011—up by 400 percent since 2005, according to the White House. Patent trolls, officially called Patent Assertion Entities (PAEs), are companies that do not create anything themselves, and sue individuals and companies for patent violations as their sole source of income.

To stop patent trolls, the Obama administration announced legislation that, among other things, would allow courts to impose sanctions on patent trolls, and make their business practices more transparent. It also announced executive actions that include public education and improvements to the patent system that will eliminate overly broad patents.

A key problem with the U.S. patent system is that it was designed before the emergence of software and the complex systems found in modern technology. The vague nature of patents for software and modern technology makes it nearly impossible for companies to know if they are violating patents, and it creates overly broad patents, according to Michael Weinberg, vice president of advocacy group Public Knowledge.

When it comes to fighting patents, many large companies have the finances to fight back, but many smaller companies—and even individuals—can be crushed by court and legal fees. According to the White House, 40 percent of small businesses say legal battles with patent trolls cause significant harm to their businesses.

Few small companies and software developers bother filing patents, not only because it costs around $10,000 for the filing, but also because they likely would not have the finances to sue someone for violating the patent.

The general idea, according to Weinberg, is “patents and innovation are not the same thing. You don’t need a patent to innovate, and just because you have a patent doesn’t mean you are not innovating.”

Marc Levin, co-founder of Collab, a NYC space for inventors and programmers, said few people in New York City’s development scene think much about patents, yet the threat of patent trolls is always there.

“Everything they share is open source,” Levin said, noting many people today who work on technology and software believe in open source—a movement designed around sharing code and designs.

With software “it’s nearly impossible” to know whether someone is violating a patent because it is so difficult to search existing patents. Due to the broad nature of many patents, “it doesn’t stop innovation because not enough people who are doing innovation know where a patent would lie or not lie,” said Levin.