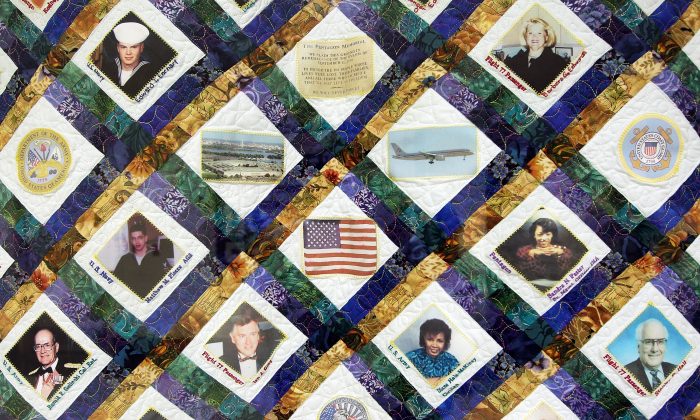 A patchwork quilt honoring victims of the Pentagon attack in the Pentagon in Arlington, Virginia, June 28, 2011. America is a patchwork nation, according to author Dante Chinni. (Alex Wong/Getty Images)
News

All my friends are good and nice. And they smell good. Beyond that, I notice some differences and some common threads. Many of them stay away from the news. One said she avoids news for her mental well-being. Too much crime and anguish, she said. Another, a man, rations his news consumption because news makes him angry, he said.

These two are political opposites. One is the pinkest of liberals, and the other the reddest of red state conservatives. They live in opposite type places. They exemplify what author Dante Chinni described in his book, “Patchwork Nation,” in which Americans self-segregate.

The woman lives in a diverse, multicultural exurb and the man up in them “thar” hills, the foothills of Appalachia. One of his best buds is the guy who introduced Georgia’s unusual gun law, nicknamed “Guns Everywhere.”

As well as physically clumping with similar people, we feed ourselves information that suits what we already think. We narrow our own sources.

Both of those good and fragrant people do that. She reads liberal writers and he reads conservative writers, and both of them avert their eyes a bit from the plain old news.

But I think we have a responsibility to look harder.

As Americans, we belong to the world’s superpower. We do not just belong to it. It belongs to us. We collectively choose the president. We demonstrate, or not. We call our senator and congressman. We appeal our property taxes. We riot, or don’t riot, and work through the law when we perceive an unbearable injustice. We agree or disagree with arming our loyal friends, the Kurds.

All us patchwork dwellers set policy for the world’s most powerful nation. We need to give it all we’ve got. We need to pay attention to our country and the world.

It’s fate that gave America that place in the world. As with Spiderman, with great power comes great responsibility.

We also need to pay attention to each other. If we follow the long tail of our individual interests, we miss a lot. Even if you are an introvert who’d rather be reading Jane Austen, try to get out there a little bit. Have lunch with your cultural and political opposite once in a while. Learn.

Rubbing elbows with people who think differently than you will only sharpen you up. And if you manage to do it in a way that stays civil, you will be modeling what most of us want Congress to do, am I right?

That beloved community the civil rights visionaries aimed for was one that honored all different kinds of people. It was the opposite of narrow patchwork enclaves, where everybody stayed with his or her own tribe, and every tribe saw the world one way.

For me, total news immersion is just part of my job. I have developed some way of being detached from the emotional side of it. Not saying I never experience indignation, grief, or horror, but it is possible to follow all the stories dispassionately. It’s possible, and needed.