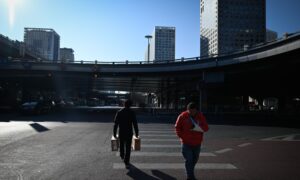 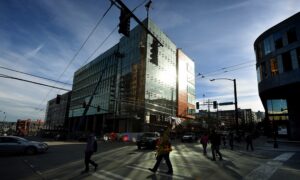 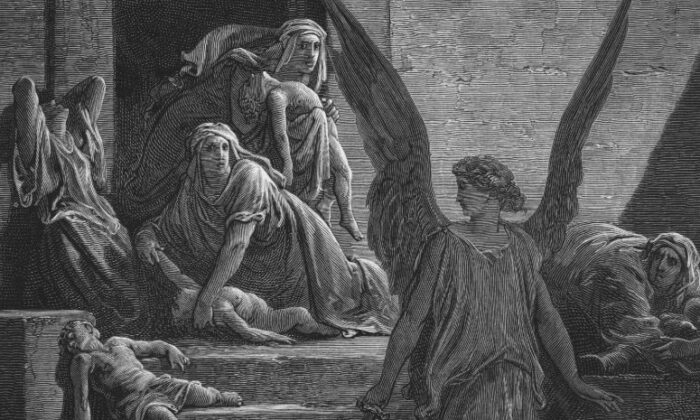 A detail from an 1866 illustration of the 10th plague—the killing of all firstborn sons in Egypt—by Gustave Doré (1832–1883). (Hulton Archive/Getty Images)
History

Past Pandemics and Epidemics

Whether ancient or modern, the death toll was often staggering
By Catherine Yang
Print

Plagues have been recorded since ancient times and were once thought to be a manifestation of the wrath of gods, often following soldiers around the world or merchants involved in trade. Here are a few notable pandemics from history:

Perhaps the most famous of pandemics is the Black Plague, which swept across Europe in the middle of the 14th century, killing an estimated half of Europe’s population over four years (between 75 million and 200 million people). The disease moved from Central Asia to Mediterranean ports to the bulk of Europe.

The plague devastated some cities so much that some required mass restructuring. Such was the case in Florence, Italy, which, after losing the majority of its population, turned fervently to religion, paving the way for the Renaissance.

The Black Death is now known as the bubonic plague and is treatable. But in the past, the plague had recurrent outbreaks every decade or so for two centuries, up to the Great Plague of London in 1665, which killed a quarter of the London population in 18 months. That event marked the last major European outbreak.

The 1889 outbreak was first recorded in St. Petersburg, Russia. With the increased travel infrastructure of the time, it took only four months for the disease to spread from Eastern Russia to cover the entire Northern Hemisphere. It was one of the first epidemics covered by the daily press.

The flu had several recurrences around the world until 1895 and killed about 1 million people in total.

The medical response to the virus wasn’t coordinated globally. Interestingly, in 1889, there also were earthquakes reported monthly from a wide variety of places around the world. There were many theories as to what was causing the flu, and some even linked the disease to these seismic events, as well as volcanic eruptions.

The Spanish flu of 1918 is sometimes called the “forgotten pandemic,” because although it infected a third of the world’s population and killed more than 50 million people, its timing at the end of World War I meant that reporting on the disease was obscured by the war.

By 1918, the United States had joined the war, and the sudden mobilization of millions across the world contributed to the virus’s rapid spread. It affected both sides of the conflict, downing thousands on either side.

In the United States, the virus spread across the country after a military outbreak at Camp Funston, but died away with summer. By fall, a mutated strain among soldiers came back. In total, an estimated 675,000 Americans died from the H1N1 virus, which forced quarantines all over the nation. At the time, children would skip rope to a song that went, “I had a little bird/Its name was Enza/I opened the window/And in-flu-enza.”

Severe acute respiratory syndrome (SARS) is  coronavirus, which first began in southern China in 2002 before spreading to 29 countries in North America, South America, Europe, and Asia.

When the virus first began spreading in China, state-run media were ordered by the Chinese regime not to report on the epidemic, but whistleblower Dr. Jiang Yanyong leaked statistics to Western media.

According to the World Health Organization, there were more than 8,000 recorded infections and 774 deaths in 2003, and since then there have been small numbers of cases. It didn’t spread widely in the United States, with 156 recorded cases in 2003.