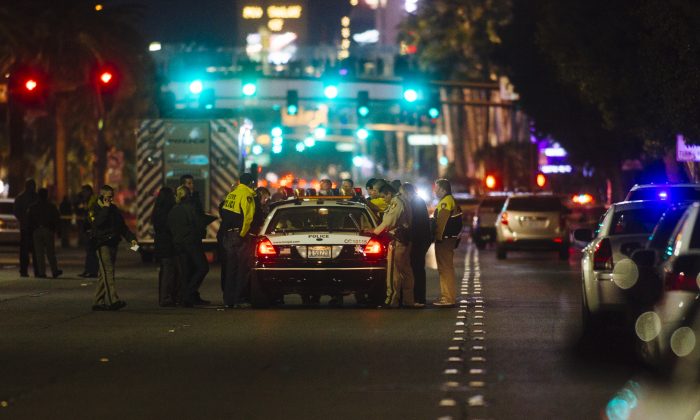 Metro Police officers block Las Vegas Boulevard South at the scene of an officer-involved shooting in Las Vegas on Jan. 22, 2016. According to the Las Vegas Sun, Capt. Matt McCarthy said officers responded to reports of a man walking in and out of Strip traffic waving a gun and pointing it at passers-by. Arriving officers approached the suspect, who did not obey their commands, McCarthy said. Officers fired on the man, who was not hit. (Mikayla Whitmore/Las Vegas Sun via AP)
US

LAS VEGAS—A juvenile passerby was injured Friday night after officers fired on a man who was walking in and out of traffic on the Las Vegas Strip waving a gun and pointing at people, the Las Vegas Sun reports.

Capt, Matt McCarthy tells that Sun that at about 7:30 p.m., officers arrived in front of the Bellagio casino and confronted the man, the Sun reports.

McCarthy says the gunfire grazed two bystanders, one of whom was a juvenile who was taken to a hospital and released in good condition.

The suspect, who is known as one who frequently sells goods to tourists, was arrested and taken into custody.