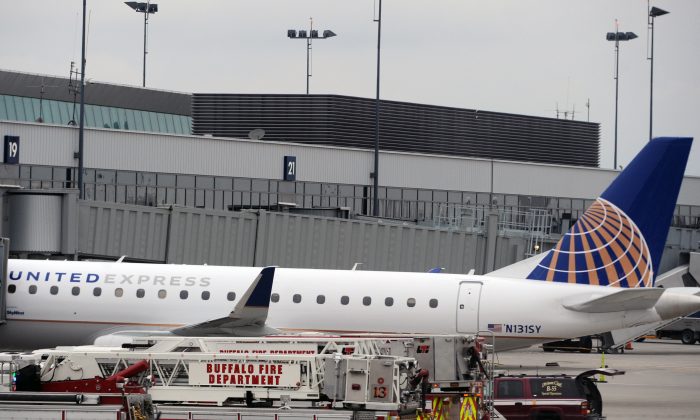 Emergency vehicles surround a SkyWest Airlines plane, operating as United Express, that made an emergency landing at Buffalo Niagara International Airport, Wednesday, April 22, 2015, in Cheektowaga, N.Y. A SkyWest spokeswoman said one passenger aboard Flight 5622, lost consciousness and the pilots rapidly descended "out of an abundance of caution." (AP Photo/Gary Wiepert)
Crime and Incidents

CHEEKTOWAGA, N.Y.—It is still a mystery why three passengers lost consciousness on a SkyWest airlines flight from Chicago to Connecticut on Wednesday, causing the plane to sharply descend to make an emergency landing in Buffalo, New York.

A SkyWest spokeswoman initially reported that one passenger aboard Flight 5622, operating as United Express, lost consciousness and the pilots rapidly descended “out of an abundance of caution.”

But in a later statement, SkyWest spokeswoman Marissa Snow said new information from medical personnel confirmed that “a total of three passengers reported a loss of consciousness while on the flight.”

Mary Cunningham, a nurse at Yale-New Haven Hospital in Connecticut was on the flight. She told WTNH-TV she helped provide medical attention after the first woman passed out.

“We got her oxygen and as soon as she got on the oxygen she was alert, she came right back,” Cunningham said. “Then I went back to my seat after she was feeling better and they called me right back because the person sitting right behind her passed out.”

“We dropped so fast that I didn’t know what was going to happen,” Larry Johnson of Danbury, Connecticut told WTNH. “I thought we were going to have to swim in the ocean or do something. All the movie thoughts are running through your head.”

SkyWest Inc., which is based in St. George, Utah, earlier had said the jet landed safely and a passenger received medical attention before being released.

An additional 15 adults and two children were evaluated upon landing, but none required treatment outside the airport, airport spokesman C. Douglas Hartmayer said.

“Anyone who said they didn’t feel well was treated at the gate,” he said.

In an earlier statement, Snow said in an email: “There were no reports before the unconscious passenger prior to the initiated descent, but I can’t speak to what may have been the specific cause of their feeling ill.”

“The passengers were evaluated by medical responders on the ground in Buffalo and were released; none were transported to the hospital,” Snow said.

The airline said it was making plans to transport the passengers to Hartford, Connecticut.

The Federal Aviation Administration said initial information indicated the Embraer E170 jet may have had a pressurization problem, but that turned out to be incorrect.

Snow said the plane’s oxygen masks did not release.

“After examination by maintenance personnel and local authorities, there have been no indications of a pressurization problem or other issues with the aircraft,” Snow said. “Our investigation is ongoing.”