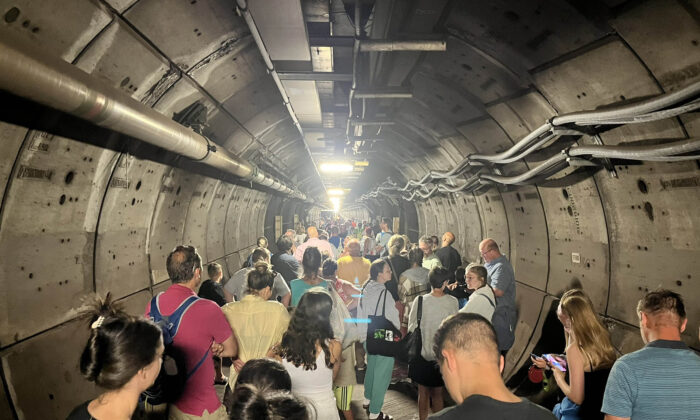 Passengers in an emergency tunnel after a train broke down down beneath the English Channel on Aug. 23, 2022. (Kate Scott/Twitter/PA)
Europe

Eurotunnel Passengers Stranded Beneath English Channel as Train Breaks Down

Dozens of Eurotunnel passengers headed for the UK were stranded in emergency tunnels beneath the English Channel on Aug. 23 for up to five hours after a train broke down.

Video footage on social media showed some holidaymakers tramping through a maintenance tunnel with children, suitcases, and dogs in tow as they were returning from vacations in France.

The train to Folkestone from Calais, France, which was carrying 100 cars, coaches, and lorries, broke down in the 31-mile tunnel after an alarm sounded.

“The service tunnel was terrifying. It was like a disaster movie,” Sarah Fellows, 37, from Birmingham, told the UK’s Press Association. “You were just walking into the abyss not knowing what was happening. We all had to stay under the sea in this big queue.

“There was a woman crying in the tunnel, another woman having a panic attack who was traveling alone. They were expecting really older people to walk for a mile down the middle of a tunnel under the sea. It was utter carnage when we arrived in Folkestone as they hadn’t really prepared for us arriving.”

The Channel tunnel reopened to traffic on Aug. 24; pictures on social media showed there was gridlock at the shuttle terminal a day earlier.

Saying safety was its priority, Eurotunnel has defended the time it took to resolve the problem. The company said passengers were provided with food and drinks and were eventually reunited with their vehicles after the train was brought out of the tunnel.

“The shuttle was brought to a controlled stop and inspected. As a precautionary measure, for their safety and comfort, we transferred the passengers on board to another shuttle, via the service tunnel,” a Eurotunnel spokesman said. “Operations like this do take time, but they are for the safety of everyone and must be conducted carefully.

“While some passengers experienced a longer journey than planned, everyone was kept safe at all times. We apologise to anyone who got caught up in the incident, but we stress that we will always put customer safety above everything.”

Eurostar uses the tunnel, which opened in 1994, to operate trains between London and Paris, Brussels, Lille, Lyon, Avignon, and Marseille, while a shuttle service ferries vehicles and passengers between Folkestone and Calais.