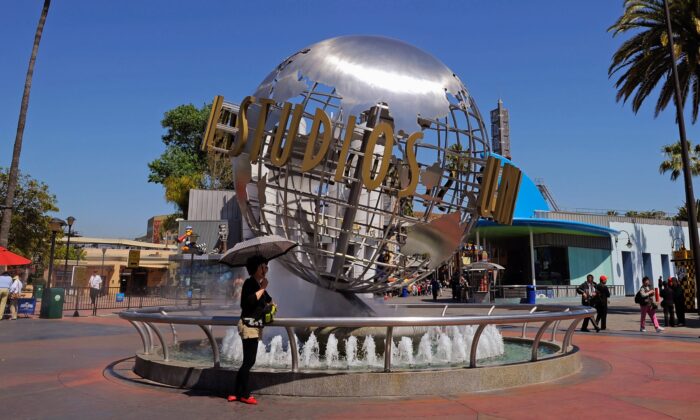 Toursits get their picture taken at the front entrance of Universal Studios Hollywood theme park in Universal City, Calif,. on May 4, 2010. (Kevork Djansezian/Getty Images)
Southern California

A power outage at Universal Studios Hollywood on Thursday left nearly a dozen passengers stranded for more than two hours on an indoor ride at the theme park in Los Angeles, California, authorities said.

Emergency crews of the Los Angeles County Fire Department were called to the scene at 3:45 p.m. and managed to rescue eleven people on the “Transformers: The Ride-3D” ride by 6 p.m., the department said in a statement to news outlets.

No injuries were reported as a result of the event and crews were able to get everyone off safely.

The park never ceased operations and power was fully restored that same day, a spokesperson for the park told Deadline.

“As a result of a power interruption from So Cal Edison, we experienced a brief power dip which resulted in exiting guests from some attractions. Power has been fully restored and we’re working to get a few remaining attractions back online. The theme park remains open,” the spokesperson told the paper.

The “brief power dip” reportedly also impacted one of the more popular “Harry Potter” and “Forbidden Journey” rides, though park operators managed to quickly restart both rides. No guests on both attractions needed to be rescued.

It’s unclear what has caused the power outage, but high temperatures across Los Angeles, peaking at 96 degrees at Universal Studios Hollywood shortly after 3 p.m., may have been a factor.

Universal Studios Hollywood offers many themed rides based on popular movies such as “Jurassic World,” “The Secret Life of Pets,” and “Fast & Furious.”