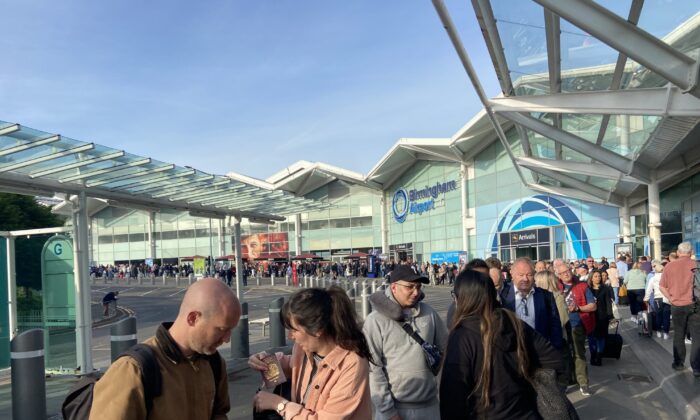 Thousands of passengers were forced to wait in long queues for several hours outside Birmingham Airport, England, on May 9, 2022. (Twitter user @BobBlack1964/PA)
UK

Thousands of passengers have been forced to wait for hours outside Birmingham Airport as the aviation sector across Europe continues to suffer from staff shortages.

Frustrated passengers took to social media to slam the “absolute chaos,” with one person saying it took her “two hours to get through check-in and security,” and others threatening legal action against the airport if they miss their flight owing to a “lack of management.”

In a statement issued on May 9, Birmingham Airport (BHX) said that it took the decision to run security queues outside the terminal to “avoid them getting tangled with check-in lines,” as half of the 15,000 passengers flying out of the airport on the day were booked to depart in the busy dawn peak.

The airport authorities thanked passengers for their patience, and said the queues were “long but managed and moving.”

It added: “Of the 7,500 customers booked to fly out of BHX in today’s dawn peak, 99.7 percent successfully caught their flights. Anyone who missed was rebooked.”

The airport said 43 percent of its employees were made redundant during the CCP (Chinese Communist Party) virus pandemic due to travel restrictions, which were lifted in mid-February with no prior warning.

It added that it began a recruitment drive in November 2021 and new security officers are expected to be on duty soon after completing training.

This has not been an isolated incident. Long queues have also been reported at airports across the UK in recent weeks, including at Heathrow, Manchester, and Stansted.

Despite the recent easing of the travel curbs, staff shortages have persisted. As a result, European airlines were forced to cancel thousands of flights in the lead-up to Easter, and UK airlines such as British Airways and easyJet are continuing to cancel flights every day owing to staffing issues.

In its latest move to tackle staff shortages, easyJet said on May 8 that it plans to remove seats on its flights so it can fly with fewer crew members.

By removing the back row of seats on its A319 planes, the budget airline will be able to fly with three crew members instead of four.