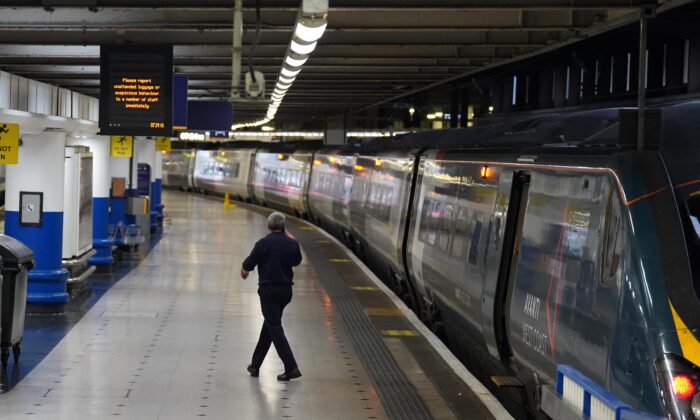 Britain’s railway network has been paralysed again after more than 45,000 rail workers walked out on Thursday in a continuing dispute over pay, jobs, and conditions.

Only about one-fifth of the rail network remains open, and lines that do open are only operating from 7:30 a.m. to 6:30 p.m.

The rail strikes, affecting Network Rail and 14 train operating companies on Thursday and Saturday, are coordinated by three unions. About 40,000 members of the National Union of Rail, Maritime, and Transport Workers (RMT) and thousands more members of Transport Salaried Staffs’ Association (TSSA) and the Unite union have joined the action.

Meanwhile, RMT members at London’s Underground and Overground are staging a strike on Friday, in a separate dispute over pay and pensions.

RMT general secretary Mick Lynch criticised the government for refusing to get involved in the talks between the unions and the train companies.

He accused Transport Secretary Grant Shapps of “using taxpayers’ money to satisfy the anti-union agenda of the Tory party and seek to break the trade unions.”

This means “the dispute will be prolonged indefinitely,” he claimed.

But Andrew Haines, chief executive of Network Rail, told ITV that he does not believe union members are “clear on what they’re striking for” and argued that the problem is not with the government but the RMT union.

He told the BBC that talks with unions have been “slow” and “painful” and there was “an absolute lack of clarity over what it would take for this strike to be called off.”

‘The World has Changed’

The government criticised the unions for causing misery to the travelling public and said strikes are not as effective as before as “the world has changed.”

A Department for Transport (DfT) spokesperson said, “Yet again, for the sixth time since June, union leaders are opting to inflict misery and disrupt the day-to-day lives of millions instead of working with industry to agree to a deal that will bring our railways into the 21st century.”

The spokesperson added, “It’s clear strikes are not the powerful tool they once were and union chiefs are no longer able to bring the country to a standstill as, unlike them, the world has changed and people simply work from home.”

The DfT urged union bosses to let their members “have their say” on Network Rail’s “very fair deal.”

“It’s time to get off the picket lines and back around the negotiating table—the future of our railway depends on it,” the spokesperson said.