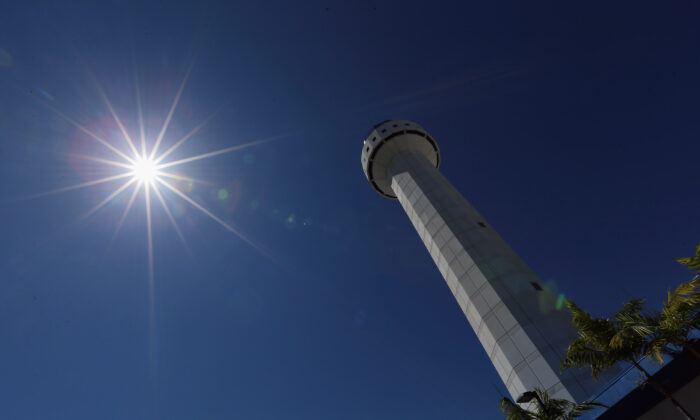 An air traffic control tower is seen in this file photo taken at an airport in Florida on March 4, 2013. (Joe Raedle/Getty Images)
Florida

A passenger without any flying experience managed to land a private plane safely at an airport in Florida after the pilot became incapacitated.

The unidentified man used the cockpit to make an urgent plea after he realized that the pilot was too ill to handle the controls. He got a response from air traffic controllers in Fort Pierce, who then guided him to a safe landing at Palm Beach International Airport.

“I’ve got a serious situation here,” the man told the controller on Tuesday, according to audio from LiveATC.net. “My pilot has gone incoherent, and I have no idea how to fly the airplane.”

Controllers focused on keeping the man calm, asking if he knew the position of the single-engine Cessna 280 and what the specific situation was with the pilot.

“He is incoherent, he is out,” the passenger responded, also saying that he has no idea about the position of the plane.

“I can see the coast of Florida in front of me,” he said.

The controller told him to “maintain wings level and try to follow the coast, either north or southbound.”

Minutes passed before controllers were able to locate the plane, which by then was heading north over Boca Raton. Then the man’s voice seemed to fade, so the controller in Fort Pierce asked for his cellphone number to enable controllers at Palm Beach International Airport to communicate with him more clearly.

Robert Morgan, a certified flight instructor, took over at that point, guiding the passenger down to a safe landing.

Morgan explained during the network’s morning show that he had never flown a single-engine Cessna 280 before. He had to use a picture of the instrument panel’s layout to guide the passenger step-by-step.

The 20-year veteran controller noted that he intentionally decided to guide the passenger-turned-pilot to Palm Beach International Airport—which is the area’s largest airport—so “he could just have a really big target to aim at.”

“I felt like I was going to cry then, because I had so much adrenaline built up,” Morgan said, describing his emotional state after the man landed the plane safely. “I was really happy that it worked out and that nobody got hurt.”

In a statement, a Federal Aviation Administration (FAA) spokesman confirmed that the pilot and passenger were the only two people aboard, adding that the agency is investigating.

There was no immediate word on the condition of the pilot, and authorities didn’t release their identities.