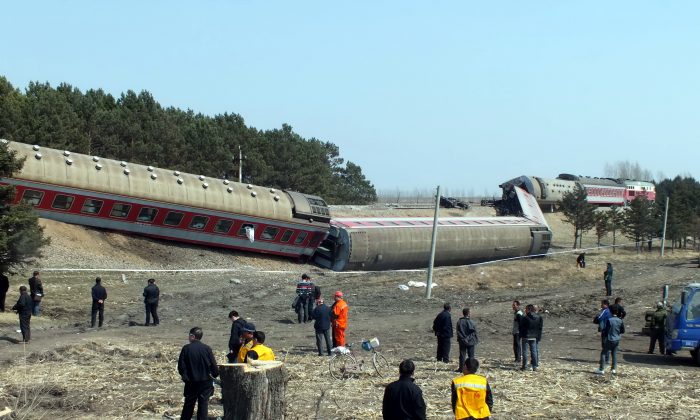 Rescuers work at the site where a train derailed on April 13, 2014, in the Hailun country of Suihua City, Heilongjiang province of China. (ChinaFotoPress/Getty Images)
China

A passenger train derailed when passing through northwestern China’s Qinghai Province on Monday afternoon, according to state media.

The T373 passenger train departed from eastern coastal Qingdao City in Shandong Province on Sunday noon, and was planning to arrive in Xining, capital of Qinghai Province, at 5:30 p.m.

It got as far as Ledu County of Qinghai before coming off the tracks.

The incident was caused by the collapse of an irrigation channel, which covered the train tracks with mud and gravel, according to state-run Chinese Central Television.  No injuries to passengers and staff were reported.

Some Chinese netizens questioned the reports of no injuries for such an apparently serious incident, but local authorities did not release further details.