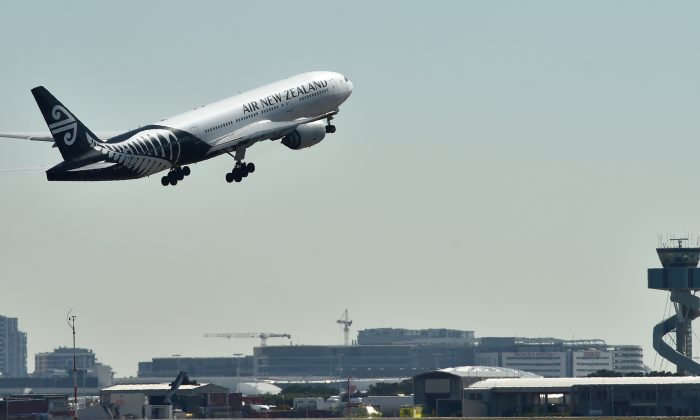 An Air New Zealand plane takes off from the airport in Sydney, on Aug. 23, 2017. (Peter Parks/AFP/Getty Images)
International

Passenger Removed From Flight After Refusing to Watch Safety Instructions

A passenger was removed from a flight after refusing to look at the safety instruction card and then putting her fingers in her ears when the steward asked her to pay attention to the briefing, according to reports.

The woman was sitting in the emergency exit row with a male companion who was also removed from the plane after it turned back from the runway at Wellington Airport in New Zealand, according to stuff.nz.

The woman was met by police, according to reports.

A passenger sitting near the couple said they were  “wealthy-looking,” according to Stuff, describing the woman, who had a Louis Vitton bag, as “high maintenance.”

When the safety video started playing and the flight attendant held up the card, the woman started to look down at her book, said the passenger.

She and her male companion then began to look at their phones.

“A flight attendant said very patiently ‘Can you please watch what’s happening because this is the exit row.'”

“The flight attendant was super kind and kept asking her, but the woman put her fingers in her ears.”

“The passengers behind them were saying ‘For God’s sake, it takes two minutes to look at it, just look at it.'”

The flight was delayed by 25 minutes, according to Stuff.

A police spokesman confirmed to the Evening Standard that they met one passenger at the airport, adding, “The passenger will receive an infringement notice under Civil Aviation Authority rules relating to the use of a cellphone.”

Air New Zealand said that the pilot was forced to return to the gate,  reported the Guardian because a passenger “failed to comply with crew instructions.”

“Police were waiting at the gate when the aircraft returned and the customer disembarked,” a representative said.

One passenger told Newshub the delay happened because a fellow passenger had refused to watch the safety video. But they had some sympathy for the woman.

“I have to say that if watching the safety video is so crucial and you can be escorted off the plane, maybe Air New Zealand should stop making ‘Rachel Hunter ice cream ad’ safety videos,” said the passenger, in reference to a much-maligned safety video. “Just make a short video that is compulsory to watch and let people know if they don’t watch the video, the police will come and take them away.”

There are no specific rules that state people have to listen to safety instructions. However, New Zealand’s Civil Aviation Authority states that if airlines consider a passenger to be a potential risk to the safety of the aircraft, its crew, they can be removed.

The rules state that the airline can remove someone who “has not obeyed the instructions of ground staff or a member of the crew relating to safety or security.”

Several cases of people being kicked off flights before take-off, with airlines often citing a refusing to follow instructions or passengers causing disruption as the cause.

A woman was kicked off a Frontier Airlines flight from Las Vegas last month after complaining about vomit on her daughter’s seat. The passenger disputes the airline’s claim that they reassigned her and her daughter seats after they complained of finding the seat wet, and smelling of vomit.

She refused to deplane and was arrested.

In March Airline Thomas Cook apologised to a 21-year-old woman who was told she would be kicked off a flight if she didn’t “cover up.”

Emily O’Connor said she was humiliated and left shaking after being told to “cover up” or she would be kicked off a flight from the UK to the Canary Islands wearing a vest-like crop-top and high-waisted trousers.

Flying from Bham to Tenerife, Thomas Cook told me that they were going to remove me from the flight if I didn’t “cover up” as I was “causing offence” and was “inappropriate”. They had 4 flight staff around me to get my luggage to take me off the plane. pic.twitter.com/r28nvSYaoY

She said she was told by the crew that her clothing was “inappropriate.”

Her social posts about the incident, including a photograph of the outfit in question, quickly went viral, as users weighed in on whether the crew were right to demand she cover up.

The story featured in British national television and newspapers.

The airline, Thomas Cook, has since apologised for the way it handled the incident, although appeared to fall short of specifically declaring whether her outfit fell foul of company policy.