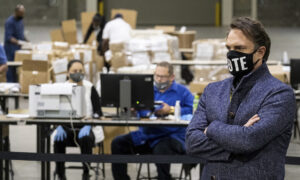 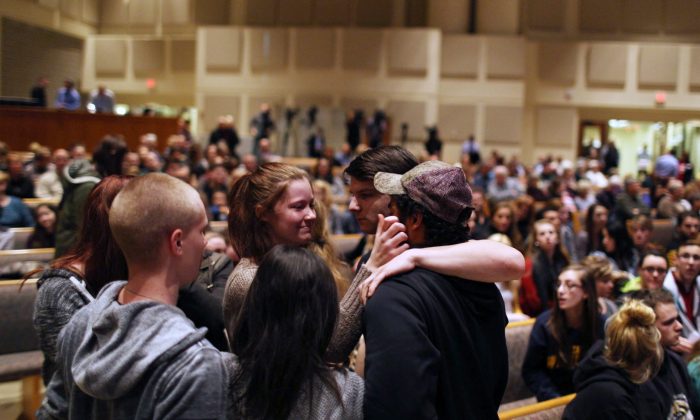 Members of the community pray before the start of the Kalamazoo Community Prayer Service at Centerpoint Church on in Kalamazoo, Mich., Sunday, Feb 21, 2016. A gunman who seemed to choose his victims at random opened fire Saturday outside an apartment complex, a car dealership and a restaurant in Michigan, killing six people in a rampage that lasted nearly seven hours, police said. (Andraya Croft/Detroit Free Press via AP)
US

A man in Kalamazoo, Michigan has recounted how he rode in the car with the Uber driver who later killed six people.

Matt Mellen, who works at a local brewery, got into the vehicle driven by Jason Dalton shortly before Dalton started randomly killing people around the city.

Mellen said Dalton introduced himself using a different name, before speeding through medians and driving across a lawn.

He wouldn’t stop. He just kind of kept looking at me like, ‘don’t you want to get to your friend’s house?
— Matt Mellon, Uber customer

Mellen was finally able to jump out at a stop, at about 4:30 p.m. on Saturday.

“He wouldn’t stop. He just kind of kept looking at me like, ‘don’t you want to get to your friend’s house?’ and I’m like I want to get there alive,” Mellen told WWMT.

After he hopped out, Mellen made his way to a friend’s house and told his fiancee MacKenzie Waite what had happened.

Waite quickly put out an alert through Facebook to locals who might be considering using Uber that night.

“ATTENTION kzoo peeps!!!! This uber driver named JASON drives a silver Chevy Equinox is NOT a safe ride! A little bit ago my fiancé got a ride with him and he was driving VERY erratically. ‘They sideswiped a car blowing through the stop sign at Henderson castle and West Main Hill, and the driver continued driving,” she wrote.

“Then this man proceeded to drive 80mph down west main swerving in and out of oncoming traffic. Despite Matt pleading with this driver to pull over he refused. Finally when he slowed down the vehicle, Matt was able to get out. He was acting completely normal throughout all of this erratic driving!! Please share if you are in the kzoo area. Stay safe! 911 was called but surprisingly they didn’t seem all that concerned……I’m thankful that no one was hurt yet.”

Both he and his fiancee were taken aback by how little authorities seemed concerned when they were contacted. Uber also didn’t respond quickly.

“We posted the picture on Facebook just so our friends wouldn’t get in the car with him if they had to take an Uber that night,” he said. “[It was a] pretty scary ordeal especially to be so closely involved with it. I’m just happy I’m safe

But both he and his fiancee were taken aback by how little authorities seemed concerned when they were contacted. Uber also didn’t respond quickly.

Dalton ended up opening fire on eight people across the county, killing six.

Sara Reynolds, another passenger of Dalton’s earlier that day, told News.com.au that she feels “like I got away with my life that night.”

“He seemed really normal, quiet and he asked us what we were going to see at the movies. I told him Deadpool and he said he’d taken his son to see it and that it was really good,” she recounted.

He said he’d gotten some really bad reviews recently… that maybe they didn’t like the bumpy ride or something.
— Sara Reynolds, Uber customer

“I asked him what it was like to be an Uber driver and he said he’d gotten some really bad reviews recently but that they’d mostly been from drunk people he’d been running home from the bars and that maybe they didn’t like the bumpy ride or something. He wasn’t angry when he said it, just quietly under his breath, about them complaining he’d been driving erratically. We were in the car with him for maybe 25 minutes. It’s so hard to think about.”

She said she felt like she’s been given another chance at life.

“I feel like I got away with my life that night. I feel like lightening only strikes the same place once and that I’ve got a new lease on life,” she said.

“I need to live life to the fullest right now. My parents are very religious and they were like ‘thank God, Sara. God was riding with you that day, he was looking out for you.'”

Dalton also picked up at least one group of people after he had committed the shootings.

A man who asked to be identified only as Derek was in Kalamazoo with his wife and her parents when he hailed an Uber following a show and dinner.

The group had heard about the shootings and asked Dalton if he was the shooter.

I kind of jokingly said to the driver, ‘You’re not the shooter, are you?
— Derek, Uber customer

“My father mentioned from the back seat, you know, the situation with the shooter,” Derek told 24 Hour News 8 in phone interview from his Indy home, reported Wood-TV.

“I kind of jokingly said to the driver, ‘You’re not the shooter, are you?’ He gave me some sort of a ‘no’ response… shook his head… “I said, ‘Are you sure?’ And he said, ‘No, I’m not, I’m just tired.’ And we proceeded to have a pretty normal conversation after that.”