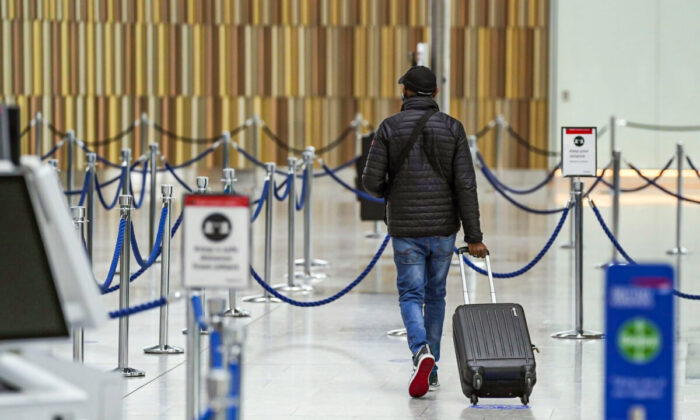 A passenger checks into their flight in the departures area in Terminal 5 at Heathrow Airport in west London on May 13, 2021. (Steve Parsons/PA)
Businesses in COVID-19

That is compared with 296.9 million in 2019 before the coronavirus pandemic led to a huge reduction in demand for air travel.

Heathrow, the UK’s busiest airport, recorded its lowest annual number of passengers for nearly 50 years in 2021, at just 19.4 million.

The west London airport has updated its 2022 passenger forecast from 45.5 million to 52.8 million, which would represent a return to 65 percent of pre-pandemic levels, but said it is not forecasting a return to profit and dividends this year despite an increase in outbound demand for travel.

Its losses during the coronavirus pandemic have now exceeded £4 billion.

Among the airports with the largest decreases in passenger numbers last year were Southend (down 95 percent), Cardiff (down 93 percent), Gatwick (down 87 percent), and London City (down 86 percent).

Passenger numbers across all UK airports last year fell by 13 percent from 2020.

That bucked the trend for major airports in the rest of Europe, such as Frankfurt (up 32 percent), Amsterdam’s Schiphol (up 22 percent), and Paris Charles de Gaulle (up 18 percent).

AOA chief executive Karen Dee said: “The CAA’s figures show just how badly UK airports were affected by the pandemic, much more so than our European competitors.

“The UK’s restrictions were more onerous and lasted for longer than those in Europe, despite our much more rapid vaccine rollout.”

Quarantine hotels remained in operation in the UK for several months after they were scrapped in most other European nations, putting many people off travelling abroad.

Later in 2021, the UK was the only country in Europe requiring both a pre-departure test and post-arrival test for all arrivals, regardless of vaccination status.

The AOA said UK airports have lost £10 billion in revenue since the first coronavirus lockdown in March 2020, but those in Germany, Italy, Ireland and the US received nearly eight times as much financial support.

Ms Dee warned that the UK “cannot afford our aviation network to lag behind our global competitors”.

The “financial health” of UK airports places the country “at a disadvantage”, she said.

“That is why the UK and devolved governments should set out a comprehensive plan to recover the UK’s aviation connectivity.”

Demand for UK flights has risen this year, coinciding with the scrapping of all coronavirus restrictions for arrivals.

Heathrow recorded its busiest month since the start of the pandemic, with 4.2 million passengers using the west London airport in March.

That represented nearly an eight-fold increase on the total for the same month last year.

Tim Alderslade, chief executive of trade association Airlines UK, said: “This summer should be a bumper one and for many routes we’re seeing demand above where we were in 2019.

“But we can’t lose sight of the fact the sector has been through its worst ever crisis and it will take several years to deal with the debt airlines had to take on to make it through the pandemic with no passengers.”

He called on the Government to “focus ruthlessly” on where it can “really make a difference”, such as supporting the development of sustainable aviation fuels and modernising the UK’s airspace.