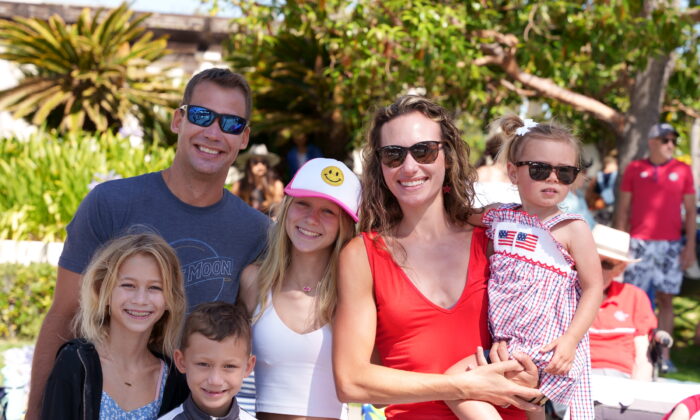 ‘Pass on American Values to Our Children’: Coronado Celebrates Freedom

Coronado, on a peninsula in San Diego Bay, is a dynamic resort city and home to about 24,000 with a U.S. Navy base. This July Fourth marks the 73rd Independence Day parade in the city.

People of all ages—locals and visitors—lined the city’s main street to cheer on the over 100 groups of parade participants. Military groups got the warmest and loudest cheers.

Celebrating freedom, and enjoying family and friends, people came out to have a good time, while reflecting on America’s values and giving thanks to those who work to keep this country free.

Navy JAG: Pass on the American Values to Our Children

Lilly Bean is a U.S. Navy JAG (Judge Advocate General) stationed in Coronado. Her brother Harrison Schultz and his three children are visiting from Florida. With big smiles on their faces, the cousins had fun drawing American flags on the ground.

“I love July Fourth, especially living here [in Coronado]. It’s an awesome opportunity to get together and celebrate our country and unity while being grateful for this place that we live,” Lilly Bean told The Epoch Times.

Schultz told The Epoch Times he appreciated this opportunity to “just enjoy being an American and supporting everyone here.” To him, being American means “keeping the values that America was founded on and really enjoy the freedoms and teach the kids the right and the wrong.”

Both Bean and Schultz agree that freedom is the most important American value. To keep the American values, “we simply go back to the basics like be kind and respectful. Help each other out, stand up for what’s right, have the courage to speak up when things aren’t done correctly. These are the things that are really important,” Bean said.

Schultz added, “and pass these values to our children.”

Coronado Mayor: July Fourth is a Celebration and Remembrance

“Coronado has a very rich American history, we are a very proud naval town, and we are proud of our nation,” Coronado Mayor Richard Bailey told The Epoch Times.

“Today is both a celebration and a remembrance. It is a celebration of the courage and the bravery of the men and women who fought for our independence so many years ago. It’s also a remembrance that today is just as important to continue to fight for those same rights and principles as it was back in our nation’s founding.”

To Bailey, the most important American value is the “equal treatment for all under the law. This is America’s promise as a country, and it is perfect. It is something we should continue to strive for.”

Bailey said he anticipated “somewhere between 100,000 and 200,000 people visiting Coronado today. It’s exciting to see everyone wanting to celebrate our nation’s independence and have a great time.”

Military Mom: Thankful to Live in a Free Country

Gail Pedrotty is a mother of three sons who are on active duty. Long-time residents of Coronado, she and her husband operate a medical office and are very involved with the military ministry. In addition, Pedrotty’s father was a World War II veteran.

Coming to watch the parade has been a family tradition for them: “We are here to celebrate America. The kids used to wake up at four in the morning to come out here and reserve their spots,” Pedrotty told The Epoch Times.

A proud military mom, Pedrotty is very grateful. She said, “We are very thankful. I’m very proud of them [sons]. And I pray for them all the time because of what they’re doing. It’s the sacrifices that they definitely make for all of us.”

“We live in a country that’s free, and [Coronado is] a city that is welcoming. You can come and walk around and feel like you belong here.“ To Pedrotty, this is the American value we should all treasure.

Vietnam Veteran: Focus on the Positive, Help Others

Wayne Strickland is a Vietnam Veteran and retired from the Coronado fire department. He participated in the parade with other Vietnam veterans to “celebrate America’s independence and thank all the veterans who gave their lives to keep America free,” he told The Epoch Times.

Strickland said that he is a member of the Coronado Rotary Club, so helping others is what’s important. He said, “People need to keep their moral standards high. Look at the good and positive things, don’t dwell on the negative. Help others.”

Retired salesman Byron Miller has watched the parade every year for the past 30 years.

He told The Epoch Times that the most important value of this country is its opportunities: “Everybody can be anybody they want. We’ve had a black president. We have black Supreme Court justices … I don’t see that happening in other countries.”

“One of the reasons people want to come here is our social services are free, free medical, free welfare. They have to earn it though,” Miller said.

Miller donates money to the parade because he would like to help promote it so more people can enjoy and celebrate Independence Day. He said, “we should be celebrating. Now people don’t learn about America in school anymore, all they learn is how bad we are.”

Miller hopes for an honest press and that the country can find its moral compass.

Jane Yang and Tina Deng contributed to this report.