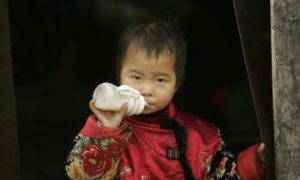 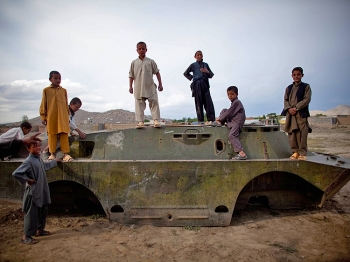 Afghan boys on the outskirts of Kabul play inside a destroyed tank left over from the 1979-1989 Russian invasion on May 2, 2010 in Afghanistan. 'This used to be a battlefield,' said young Ubaydullah, 'but now it's our playground.' The Pashtun people also known as Pathans, primarily live in Afghanistan and Pakistan with a total population estimated at around 42 million in some of the 60 major tribes and sub clans (Majid Saeedi/Getty Images)
World

By Joshua Philipp
Print
As the ancient kings of Afghanistan, the Pashtun today constitute nearly the full ranks of the Taliban while also holding a majority in the Afghan government. The war in Afghanistan is no simple religious war. For the Pashtun, it is an ethnic war and a war of revenge; one of foreign invasion and plots by warring tribes.
Complicated tribal dynamics in Afghanistan are not given their due weight by coalition leaders, but they will have a big impact on how things play out in Afghanistan after the U.S. withdrawal.

There is a pervading suspicion among the Pashtun that rival tribes are colluding with U.S. forces to destroy them. According to author Jere Van Dyk, he has heard this belief voiced by Pashtun from the lowest ranks all the way to high-level government officials.

“The Pashtuns feel that they are under attack,” said Van Dyk in a phone interview.

Van Dyk lived alongside the mujahedeen, Muslim fighters, in the 1980s and maintains contact with high-ranking Afghan officials to this day. In 2008, he attempted to disappear into Pashtun culture and infiltrate the Taliban, but was captured. He recounted the experience in his book, "Captive, My Time As A Prisoner Of The Taliban.”

The Pashtun are the largest tribe in Afghanistan, comprising 42 percent of the population.

Aside from coalition forces, there are three main players in the Afghan conflict: The Tajiks in northern Afghanistan, the Punjabis in Pakistan, and the Pashtun whose tribal region is mostly in the south and then stretches 80 miles east into Pakistan.

While nearly all Taliban insurgents are Pashtun, the officer core of the Afghan army is primarily Tajik, and nearly 80 percent of the Pakistan army is Punjabi.

Thus, it is impossible to consider Afghanistan in isolation from Pakistan. “This in many ways is an ethnic war, between the Punjabis which control the bureaucracy and military in Pakistan, and the Pashtuns of the tribal areas and across the area into Pakistan,” says Van Dyk.

“Pakistan is going to try to control this until the very end,” he said.

“If you talk to any Pashtun along the tribal belt on both sides of the border, they will tell you that Pakistan is trying to create chaos, or the image of chaos, in order to get money from the U.S.,” says Van Dyk.

The Tajiks aligned themselves successfully with the northern alliance—a loose coalition of mostly non-Pashtun groups united to defeat the Taliban—and with the United States at the very beginning, explains Van Dyk.

The United States is also making a common mistake in operations in the Pashtun Afghan south, by giving the operations names in the Tajik language, a Persian dialect called Dari.

“This is telling every single Pashtun that the United States has allied itself with the Tajiks,” he said.

The Pashtun believe they are caught in the middle of a conflict meant to crush them.